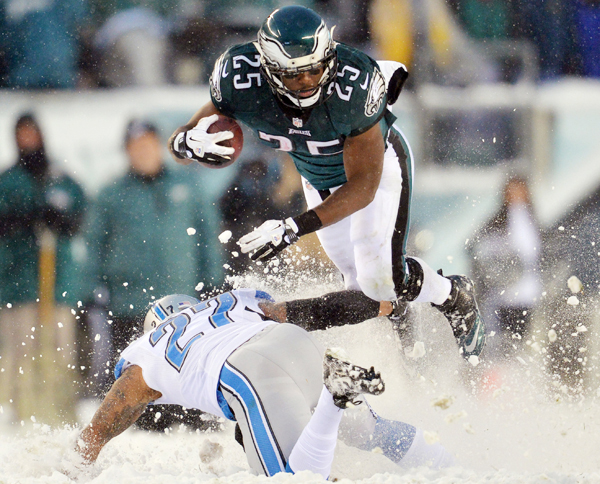 Philadelphia Eagles running back LeSean McCoy (25) leaps over Detroit Lions defensive back Glover Quin during the fourth-quarter action in the snow and blizzard at Lincoln Financial Field on Sunday. [USA TODAY/NEWS1]

National Football League games on Sunday were nothing short of a wintry wonderland, with snow creating extreme conditions that set up a slew of sensational scoring plays and a series of breath-taking comebacks.

Snow affected four games on the East Coast of the United States, with treacherous footing leading to slipping, sliding and an abundance of big plays as offensive players in the open field cut past stumbling defenders.

The most frantic finish came in a 29-26 victory for the Baltimore Ravens (7-6), the reigning Super Bowl champions, over the visiting Minnesota Vikings (3-9-1) that allowed the winners to maintain a fragile hold on an AFC wild-card berth.

Players scored five touchdowns over the last 125 seconds of the game in ping-pong fashion.

The last-gasp drive came after Vikings quarterback Matt Cassel threw a short pass to receiver Cordarrelle Patterson, who raced 79 yards for a go-ahead touchdown with 45 seconds left in the game. That followed a 77-yard kickoff return for a touchdown by Baltimore’s Jacoby Jones, which came on the heels of a 41-yard touchdown burst up the middle by running back Toby Gerhart, who had replaced league rushing leader Adrian Peterson after Peterson left the game with an apparent ankle injury.

Keeping pace in the AFC with the Ravens were the Miami Dolphins (7-6), who maintained their sunny dispositions by holding on for a 34-28 win over the Steelers in Pittsburgh. Miami quarterback Ryan Tannehill tossed three touchdown passes, hitting tight end Charles Clay with a short pass and watching him break away from three defenders to get into the end zone with 2:53 remaining for the winning score.

The Steelers (5-8) faded from the playoff picture, but not before giving the Dolphins a scare with a desperate effort on the last play of the game.

Pittsburgh quarterback Ben Roethlisberger, who passed for 349 yards and three scores, connected on a short pass and after a series of laterals, fleet-footed Antonio Brown sped up the sideline and into the end zone before officials ruled he had put a toe on the sidelines 13 yards short of pay dirt. The heaviest snow fell in Philadelphia, where it came up to players’ calves and obscured yardage markers in the Eagles’ 34-20 victory over the Detroit Lions in a match-up of division leaders. Sloppy conditions seemed to suit Philadelphia running back LeSean McCoy, who darted through the Lions for a franchise-best 217 yards, including touchdown runs of 57 and 40 yards. Reuters