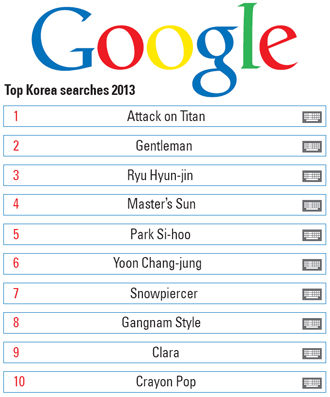 A Japanese animation allegedly inspired by the country’s ultra-nationalist movement dethroned Psy to the No. 1 spot on Google Korea’s list of top search keywords this year.

But it wasn’t its controversial nature that put it on top. Koreans simply liked it.

“Attack on Titan,” a Japanese animation based on a manga by Hajime Isayama, topped Google Korea’s 2013 Zeitgeist list, the company said.

Its Korean title, “Jingyeokeui Geoin,” spawned countless parodies and spin-offs in the Korean media, with many television programs and news articles featuring a person or a phenomenon with a title starting with “Jingyeokeui.”

The Japanese anime is about a bloody battle between people and human-eating giants, or titans, which some critics said were an allusion to China.

Isayama himself became a top search keyword on Korean portal sites in October after a news report that he made an ultra-nationalistic comment against Korea through a secret Twitter account. He was reported to have tweeted that the 1910-45 Japanese colonialism of Korea doubled Korea’s population and Koreans’ life expectancy, which drew criticism from his Korean fans.

Psy, who topped the 2012 Google Korea Zeitgeist list with his global hit “Gangnam Style,” came in second this year, making the Korean rapper the first singer to claim a top three position for two straight years since Google Korea began compiling the list in 2008.

In Google’s global Zeitgeist list last year, Psy was a runner-up to Whitney Houston, who died in February 2012.

Ryu Hyun-jin of the Los Angeles Dodgers, who spent the most successful season as a Korean rookie in the U.S. Major League, was third on Google Korea’s list. The 26-year-old southpaw posted 14 victories and eight losses, helping the Dodgers advance to the National League Championship series.

Google Korea also compiled several other lists. Ryu topped the most searched person list, on which Psy did not figure in the top 10. The No. 2 figure was Park Si-hoo, an actor accused of a sexual assault, a charge that was later dropped by his accuser. Yoon Chang-jung, a former Blue House spokesman also involved in a sexual assault scandal, was third on the most searched persons list.

He was fired from his job after news reports that he groped a young female intern from the Korean Embassy in Washington during President Park Geun-hye’s trip to the United States in May.

Psy’s “Gentleman” came out on top of the most searched song list, beating “Gangnam Style.” “Gentleman” posted over 600 million views on YouTube as of yesterday, but is still lagging behind “Gangnam Style,” which is continuing its all-time record run of 1.8 billion.

In its Information and Telecommunication segment, the iPhone was the sixth most searched keyword, demonstrating Apple’s challenge on Samsung Electronics’ home turf. Samsung’s two premium smartphones, the Galaxy S4 and Galaxy Note 3, took the two highest slots on the list, ahead of Sony’s tablet-laptop, which was followed by Samsung’s Galaxy Note 2 in fourth place.

On the general Zeitgeist list, “The Master’s Sun,” an SBS drama that starred So Ji-sub and Gong Hyo-jin, came in fourth.