Biometric identification the next big thing

Biometric identification the next big thing 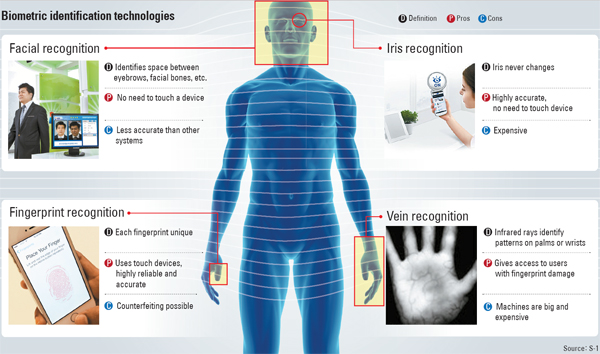 The smartphone screen turns on in two seconds as a user gazes at a sensor near a camera that never reacts to other people. It is all possible because the iris recognition sensor comprehends and processes preregistered iris patterns that are distinct for every person.

This simulation is a picture of a soon-to-be-realized future presented by Samsung Electronics, which plans to launch a smartphone equipped with iris recognition technology. The Korean tech company obtained a patent for the technology in May 2012. Industry watchers predict the Galaxy S5, scheduled for release next year, will feature iris recognition. Samsung already unveiled “Smart Stay” technology with the Galaxy S3 and S4, a basic facial recognition technology that keeps the screen light on as long as a user is looking at it.

“Whether or not we can implant the technology on our phone depends on if we can squeeze the recognition system to fit into slim smartphones,” said a Samsung official.

New biometric security technologies are poised to be commercialized soon in Korea, reflecting growing concern over leaked and stolen personal information. According to the Ministry of Security and Public Administration, financial damages incurred by illegal access to personal information through phishing and network penetration are estimated to exceed 4 trillion won ($3.8 billion) each year.

Biometric security technologies like iris or vein recognition can’t easily be penetrated by counterfeiting or falsification since they don’t leave marks, unlike fingerprints. Duplication is also difficult since the composition of the iris pattern has not been technically decoded.

According to Korea Internet Security Agency, the local biometric market was estimated at 350 billion won last year, nearly quadruple the 86.6 billion won in 2010.

Fingerprints are one of the most widely used biometric technologies. Apple’s iPhone 5S, released in September, gained popularity with a new home button that recognizes fingerprints to unlock the phone. Taiwanese HTC’s One also features the function. Korea’s third-largest mobile phone maker, Pantech, developed its own fingerprint recognition technology that is featured on its newest smartphones.

“We are developing a gender and age recognition technology applicable on cameras. It is scheduled to commercialize next year,” said an S-1 official.

Apple also registered a face recognition related patent to the U.S. Patent and Trademark Office, and took over PrimeSense, an Israeli company that manufactures 3-D video recognition sensors, for $360 million.

Some companies apply vein recognition technology to their devices. Japan’s Fujitsu released the Celsius H730 laptop last Tuesday that recognize veins on the palms, since vein patterns are unique to each individual. The laptop scans the veins with infrared rays and unlocks the system only for registered users. It takes 0.01 of a second to identify a user with a success rate of 99.99 percent.

But some market watchers say the biometric security technologies will not be 100 percent secure.

According to a Reuters report in late September, a German hacker group called Chaos Computer Club posted a YouTube video demonstration of how the iPhone 5S Touch ID function could be broken by photographing a fingerprint and printing it on transparent paper.