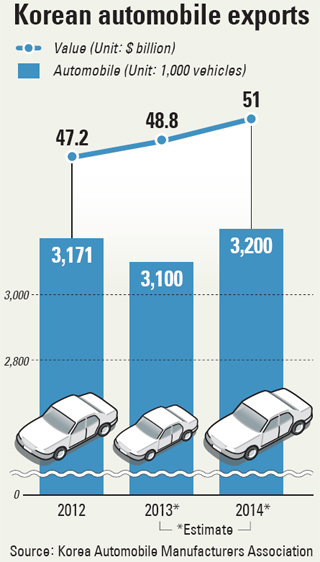 Korea’s auto exports will hit a record high next year on rising demand from the global auto market, the Ministry of Trade, Investment and Energy predicted yesterday.

According to the ministry, Korean automobile shipments are likely to reach 3.2 million units in 2014, up 3.2 percent from this year’s projected 3.1 million.

In addition, the ministry added that the value of those shipments will be a record high of $51 billion, up 4.5 percent from this year’s estimate of $48.8 billion, due to rising shipments of large cars and sport utility vehicles.

According to data from the Korea Automobile Manufacturers Association, large cars and SUVs accounted for only 31.7 percent of total automobile exports in 2009; but for the first 10 months of this year, the figure was 47.5 percent. As a result, the average price per export unit also increased from $10,692 to $14,474 during the same period.

Global automobile demand next year is predicted to be 90.34 million vehicles, up 4.8 percent from this year’s 86.21 million, according to data from KAMA.

“The global market is expected to grow with solid demand in the U.S. and European markets that are likely to show their biggest growth in seven years,” the ministry said in a release.

The ministry also pointed out that additional tariff reductions from the EU-Korea Free Trade Agreement will improve the price competitiveness of local automakers. Starting July 1, tariffs for cars with engine displacements of 1,500 cc or less will go from 5 percent to 3.3 percent, and cars with displacements of more than 1,500 cc will not be subject to tariffs.

An increase in production is also expected to drive exports. Although local automakers suffered a production loss of 170,000 vehicles due to strikes and a boycott of weekend work, the ministry speculated that local production will reach 4.6 million vehicles in 2014, up 2.2 percent from this year, and 69.6 percent of that will be shipped overseas.

Overseas production will also increase 6.3 percent to 4.4 million vehicles next year due to an expansion of capacity at existing plants and the opening of new plants in China.

However, the ministry warned that exports could be hurt by a strong won and the tapering of stimulus by the U.S. Federal Reserve. According to a recent report from the LG Economic Research Institute, the won-dollar currency rate is expected to go down from an average of 1,098 won ($1.04) to 1,060 won in 2014.

For the domestic auto market, the ministry predicted growth of 1.5 percent year-on-year to 1.58 million units next year, up 1.5 percent, although growth will be driven by imports.

The ministry predicts domestic car sales will remain unchanged at 14 million in 2014, but imported car sales will reach 180,000, a 14.6 percent increase from this year’s estimated 157,000 units.

Although there is risk of increasing household debt and production disruptions, the ministry said a growing number of older cars and consumption tax deductions for engine displacements more than 2,000 cc will create some demand in Korea next year.

According to the ministry, the number of cars registered for 10 years or more reached 6.59 million as of this November, 330,000 vehicles more than in January.