With changes ahead, labor unrest could be size of tsunami

With changes ahead, labor unrest could be size of tsunami 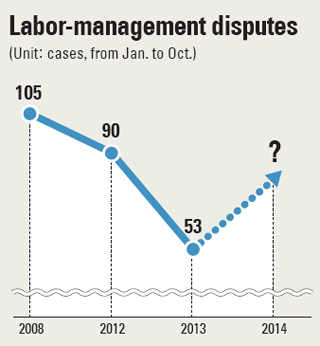 A member of senior management from a local business group met with union leaders recently to explain some big changes coming up. Some of them are undeniably positive, such as annual wage increases of at least 20 percent starting next year.

Even so, the union leaders barely wanted to hear him out - because of the scope of the changes about to hit the Korean economy.

“Over the past five years, our relationship with the union was quite stable without any big disputes,” he said. “But I doubt if we’ll be able to carry on such a good relationship next year.”

Tensions are escalating between management and labor across the nation ahead of various changes that will be implemented in the country’s companies next year following policy amendments. Concerns are growing that next year, businesses will be involved in a frenzy of labor-management disputes.

Changes include expanding the scope of ordinary wages to include bonuses and payments made for allowances, cutting working hours from 68 hours per week to 52 hours, and extending the retirement age from 55 to 60.

A recent report released by the Ministry of Employment and Labor said, “Conflict between labor and management at industrial sites is expected to be aggravated by the process of improving the country’s wage system by expanding ordinary wages and implementing the so-called salary peak system to efficiently extend the retirement age.”

Under the salary peak system, companies will pay reduced salaries to employees above the age of 55, which will allow them to keep employing them until 60, the new retirement age set by law.

The report also said that when managements sit down with the unions to negotiate 2014 wages, they will ask for reduced wage growth so they can afford the extended retirement age and the increase in ordinary wages.

There is a high possibility that unions will reject such offers, the report stated. It also forecast that there could be labor-management disputes in the public sector if the government tries to reduce welfare benefits to improve public institutions’ financial conditions.

The metal workers union under the Korean Confederation of Trade Unions has already come up with a guideline that says: “Do not allow management to switch payment forms for allowances and regular bonuses.”

Hwang Yong-yeon, an official of the Korea Employers Federation, said, “We expect that all companies will experience labor-management conflict over the issue of policy changes. This can cause nationwide disputes and also full strikes.”

Cho Joon-mo, a professor at Sungkyunkwan University, echoed the concern.

“A tsunami of labor-management disputes is heading this way,” Cho said.

A ministry official said, “Our position is that we promote labor policies in a systematic and consistent manner.”