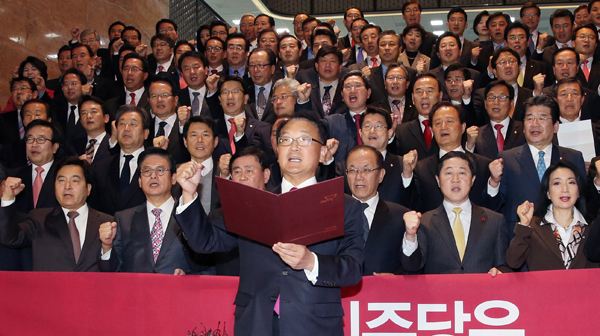 Lawmakers of the ruling Saenuri Party stage a protest in the National Assembly yesterday to demand the opposition Democratic Party expel lawmaker Jang Ha-na, who publicly declared Sunday that President Park Geun-hye should step down. [NEWS1]

Opposition Democratic Party lawmaker Jang Ha-na’s declaration Sunday that said she can’t accept the “unlawful” presidential election of last year and demands that President Park Geun-hye step down has threatened the thaw in the relationship between the DP and the ruling Saenuri Party.

Making the DP’s position even worse, Representative Yang Seoung-jo made controversial remarks at a senior lawmakers’ meeting yesterday, saying President Park could follow in the footsteps of her father, former President Park Chung Hee, who was assassinated by his own spy chief 34 years ago.

Saenuri lawmakers, enraged by the DP lawmakers’ comments, demanded apologies and even suggested the National Assembly expel them.

Jang’s announcements are “an insult to public sentiment and an act of disrespecting a democracy that granted [Park] the presidency by a margin of more than 1 million votes,” said Choi Kyung-hwan, a floor leader of the Saenuri.

First-term lawmaker Jang is the first to formally reject the results of last December’s presidential election, although the Democrats have persistently claimed that the National Intelligence Service and other government agencies interfered on Park’s behalf, harming the performance of their candidate, Moon Jae-in, currently a lawmaker with the DP.

Jang said in her statement that the NIS waged an online smear campaign against Moon that consisted of 22 million tweets.

“According to the facts that have been revealed so far, the Dec. 19, 2012, presidential election was clearly a fraudulent election that systematically mobilized state organizations,” she said. “As President Park claims, she may not have directly asked for such moves, but it is undeniable that she was elected thanks to the illegal intervention of public organizations. Now she has no choice but to apologize and step down immediately.”

Jang argued a by-election for a new president should take place at the same time as local elections on June 4. Even her own party appeared perturbed by her demands.

“Representative Jang’s announcement is simply her personal thoughts, and it is regrettable that a lawmaker of this party publicly came up with a personal stance that is different from the party’s,” said Park Yong-jin, a spokesman for the Democrats.

Her statement created such a furor within the DP that Jang volunteered to step down as vice floor leader of the party yesterday.

The 36-year-old Jang was elected through the proportional representative system specially designed to bring younger politicians into the legislature.

Born on Jeju Island in 1977, she studied sociology and philosophy at Yonsei University.

She worked various part-time jobs - call center employee, chef’s assistant, writer for a broadcasting station and carpenter - before joining the predecessor of the Democratic Party in 2003.

“Former President Park Chung Hee mobilized the weapon of the Korean Central Intelligence Agency [precursor of the NIS] for his strongman rule, but he couldn’t have expected the tragic result of himself being assassinated by the weapon of his own making,” he said. “President Park should take a lesson from former President Park Chung Hee [and her father]. She should carefully keep in mind the warnings from the citizens that she shouldn’t walk in the former president’s footsteps.”

Yang also urged Park to abandon her arrogance, self-righteousness and lack of communication, and get in touch with her own citizens.

Lee Jung-hyun, senior presidential secretary for public affairs and one of the closest aides to President Park, did not hide his enormous outrage at the lawmakers’ words.

“Yang, a third-term lawmaker and a lawyer, was making a verbal assault. He is trying to disrupt the national spirit and challenging democracy,” he cried at the top of his lungs in a briefing at the Blue House yesterday evening. Lee demanded that the Democrats come up with its official stance on the “potential of the president’s assassination” as mentioned by Representative Yang and clarify its position on last year’s presidential election.