Hyosung chairman to be queried over corruption

Hyosung chairman to be queried over corruption 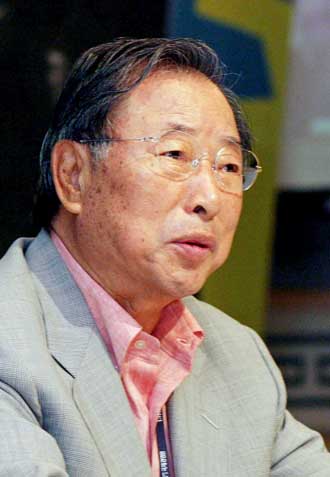 Prosecutors yesterday called in the chairman of Hyosung Group for questioning on charges that he was behind the company’s massive tax evasions and creation of slush funds.

Chairman Cho Suck-rai, 78, who was recently admitted to Seoul National University Hospital for high blood pressure and arrhythmia, indicated yesterday that he will appear before the Seoul Central District Prosecutors’ Office at 10 a.m. today for questioning.

The questioning follows raids in October on the homes and offices of Cho’s three sons to search for evidence related to alleged slush funds and possible tax evasion. Cho Hyun-joon, the chairman’s oldest son and president of Hyosung Group, was questioned for two days on Nov. 28 and Nov. 29. Cho’s second-oldest son, Hyun-moon, was also investigated by the prosecution early last month.

Cho’s group is suspected of forging its account books for more than a decade to cover up losses incurred during the 1997 financial crisis. Through 1 trillion won ($950 million) worth of creative accounting, the group allegedly evaded hundreds of billions of won in corporate taxes.

During this time, private family funds were mixed in with corporate money to raise slush funds, prosecutors claim. The tycoon’s family was also allegedly involved in a series of illegal financial transactions using third-party names.

Hyosung Capital, the group’s financial arm, is also suspected of providing up to 30 billion won worth of illegal loans to the Cho family and senior executives.

Hyosung, with more than 11 trillion won in assets, is the country’s 26th-largest conglomerate.

Prosecutors are expected to determine the level of punishment for Cho’s family and Hyosung’s senior executives following the questioning of the chairman.