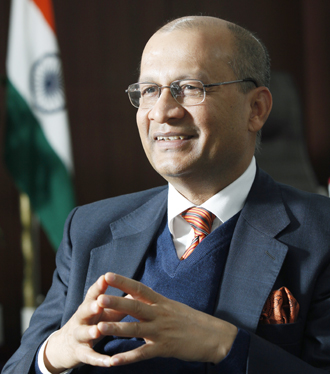 Korea and India have a unique bond. The two countries celebrated four decades of bilateral ties this year with an abundance of planned cultural and economic events, but their relationship actually dates back much farther than that - nearly 2,000 years, to be exact.

Over the past four decades, “our relations have been transformed beyond recognition,” Vishnu Prakash, the Indian ambassador to Seoul, affirmed as he sat down for an interview last Thursday at the Indian Embassy in Yongsan District, central Seoul.

In fact, in just the past few years alone, the two Asian nations have made significant strides economically and politically, using complementary skill sets to their advantage.

Former President Lee Myung-bak visited India in 2010 as the guest of honor during Korea’s Republic Day celebrations, where the two countries’ relations were elevated to the level of a strategic partnership. That same year, the Korea-India Comprehensive Economic Partnership Agreement also went into effect.

And in 2011, the Indian Cultural Center in Seoul opened its doors, offering lessons in dance and Yoga, Hindi language and cooking classes, among other things.

More recently, a new Indian Cultural Center debuted on Friday in Busan, with the support of Hongbeop Temple and the president of an information technology company. The new two-story cultural center was inaugurated by Prakash; Busan Mayor Huh Nam-shik; the Venerable Shim San, head monk of Hongbeop Temple; and Kim Yang-shik, chairman of the Hannarae Foundation and director of Indian Arts Museum.

But, celebrations aside, the two countries have set a $40 billion target for bilateral trade by 2015 - a bold goal for two of the biggest economies in Asia. Korea is currently the fourth-biggest economy on the continent, trailing just behind India, the third biggest. By 2030, India’s economy is expected to be the third largest in the world.

“At the moment it looks like a slightly optimistic target for the simple reason that there has been an unexpected economic slowdown, not in the region, but globally,” Prakash acknowledged.

However, that hasn’t put a damper on the growth trajectory.

“There is no doubt about the trajectory of the growth of trade [between the two countries] for the simple reason that India will become the biggest market in the world by 2030,” he said.

“What is happening in India is a youthful population, an educated population, rapid economic growth, large market, growing middle class. What does this mean? It means demand,” the Indian ambassador continued. “So, I am very confident that, given the synergies and [our complementary] economies, our trade and economic ties will only grow from here. It’s not a question of if, but a question of when.”

As it stands, bilateral trade is estimated to reach around $18 billion this year.

It is expected that by 2025, India’s middle class will be the biggest in the world, at close to 600 million people, Prakash added, nearly twice what it is now at nearly 300 million people.

“India has been deficient in infrastructure,” Prakash said. “But now that we have attained a level of economic development, we are trying to rectify that deficiency.”

According to Prakash, India invests $200 billion every year in infrastructure development to build roads, highway systems, airports and shipyards.

“Korean companies are already here - Doosan, Hyundai Rotem, Samsung Engineering and Construction - but we would love to see Korean companies play a more active role in infrastructure development because we are not only talking about the next three to five years, but the next 15 to 20 years.”

By 2020, he added, it’s estimated that the size of India’s rapidly growing electronics market would be $400 billion per year. Right now Korea’s Samsung R&D Institute in Bangalore is the biggest Samsung research and development center outside of Korea.

“To put things in perspective for you - today, Samsung sells three million mobile phones every month in India,” he said. “And they’ve got 4,000 Indian engineers doing top-quality research and development in Bangalore. That is the kind of area that I am talking about .?.?. Korean hardware skills and Indian software skills that can come together - and are coming together - to yield a positive dividend to both our countries.”

“And one country that has excelled in this field is Korea.”

Korea and India have been particularly successful in their drive to become leaders in education, Prakash added.

“One of the things I am happiest about is our engagements with Korean education institutes,” he said. “We have institutions of great excellence in Korea and India.

As the ultimate cultural exchange, the ambassador expressed his desire to one day donate a sapling from India’s religiously symbolic Bodhi tree to Korea. The tree, located in Bodh Gaya, India, is said to be the site where Siddhartha Gautama, the Buddha, attained enlightenment, and is a popular destination among pilgrims.

“In 65 years of history, there are only two examples where we have given the sapling of the Bodhi tree to a friendly country,” Prakash said. “Imagine what it would do for our relations. It would become a place of pilgrimage, and a symbol of India and Korea’s cultural affinity.”