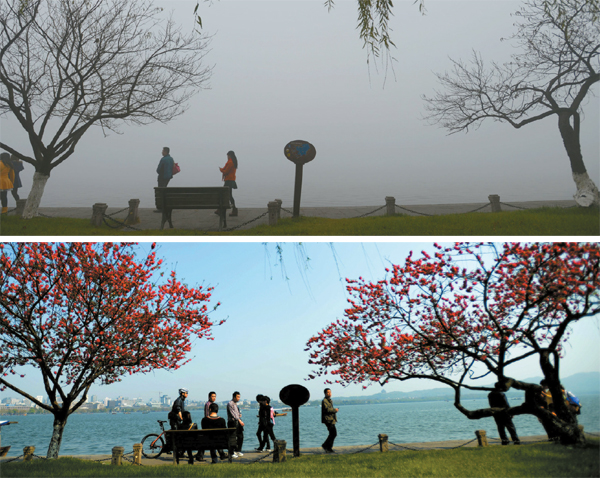 Contrasting photos of the famous Xi Hu tourist site in Hangzhou, the capital of Zhejiang Province in eastern China, show the effect of air pollution. The picture on top was taken Sunday while the picture below was taken on April 2. Fine-particle pollution from China has settled over Korea. [XINHUA/NEWSIS]

After days of worsening air pollution, the National Assembly’s Environment and Labor Committee agreed to increase next year’s budget for monitoring air pollution to 11.9 billion won ($11.3 million) from a proposed 1.7 billion won.

The dramatically increased budget - a 10 times increase - was proposed by lawmakers on both sides of the aisle, a rare display of bipartisanship amid ongoing gridlock between the ruling and opposition parties. It came with growing public anxiety over the wet clouds of gunk from China settling over the country, and as the sight of people wearing masks to keep from breathing the stuff becomes more common.

The Ministry of Environment initially earmarked a 1.7 billion won budget for air-pollution prevention for next year.

Representative Kim Sung-tae, a member of the ruling Saenuri Party on the environment committee, said the government’s measures to monitor fine-particle pollution were “not reflected in the ministry’s initial budget plan,” making the budget increase an inevitable choice.

Korea is just coming to grips with the need to monitor fine-particle pollution.

Air pollution, or particle pollution, is produced when moisture in the air is combined with fine-particle matter. Particles less than 10 micrometers in diameter - known as PM-10 or coarse particles - are small enough to be inhaled into the lungs.

PM-2.5 refers to particles less than 2.5 micrometers in diameter, known as fine-particle pollution. Fine particles are largely produced from automobiles and factories and are worse for the human body than coarse particles.

In the first eight days of this month, Seoul’s average fine-particle level stood at 37 micrograms per cubic meter, 12 micrograms more than the safe level set by the World Health Organization for any 24-hour time period.

“Respiratory organs such as lungs are more susceptible to fine particles because of their miniature size,” said an official at the National Institute of Environmental Research, which is under the Environment Ministry.

“The Environment Ministry runs about 30 monitoring sites with PM-2.5 capacity in the country and plans to increase the number gradually,” the official said.

According to the National Institute of Environmental Research, Korea is being hit by a massive amount of fine-particle pollution from China, nicknamed the “World’s Factory” for its labor-intensive and low-wage industries. Winds run from west to east in the fall and wintertime, bringing the pollution to Korea.

The state-run China News Service reported Saturday that the world’s second-largest economy suffered one of its worst air pollution days Saturday, when 104 cities had concentrations of fine-particle pollution exceeding 300 micrograms per cubic meter, prompting the U.S. Embassy in Beijing to strongly warn its citizens against going outside.

Beijing also suffered from acute air pollution Sunday morning, with the fine-particle pollution level reaching 420 micrograms per cubic meter, attaining the level of “hazardous,” according to the U.S. Embassy and 16.8 times the level considered safe by the WHO.

The International Agency for Research on Cancer, the specialized cancer agency of the WHO, reported in October that exposure to outdoor air pollution “causes lung cancer” and is also associated with the risk of bladder cancer. The agency also noted “223,000 deaths from lung cancer worldwide resulted from air pollution” in 2010.