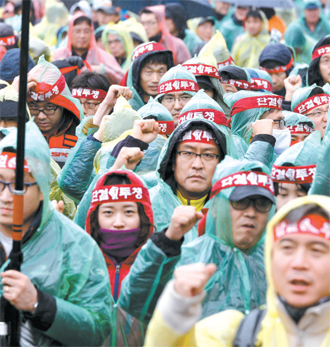 Union members of the railway operator Korea Railroad stage a rally yesterday in front of Seoul Station to oppose the launch of a separate subsidiary that will run a new bullet train line departing from Suseo in southern Seoul. [NEWSIS]

Union members of the state-run railway operator went on strike yesterday, the first walkout in four years, to protest Korea Railroad (Korail) from launching a separate subsidiary to run a new bullet train line departing from Suseo in southern Seoul.

But the union’s policy requiring a certain number of staff to work translated into a limited impact on services.

KTX bullet train services operated as usual yesterday, although freight transport services were curtailed to 36 percent of the normal volume. Only 60 percent of Saemaul (express) and Mugunghwa (regular) trains operated yesterday. The strike was spurred by the company’s plan to introduce a separate operator to run the new Suseo KTX line that will open in 2015.

Korail’s union views the formation of a new operator as a sneaky way of privatizing part of Korail. Korail and the Park Geun-hye administration deny this and say increasing the number of operators will boost competition. The strike is meant to derail a vote on the new subsidiary at a board meeting set for today.

“It is all too clear that if the Suseo KTX is separated from Korail, the next step will be a privatization with the goal of earning profits for private capital,” said Kim Myoung-hwan, president of the Korean Railway Workers’ Union.

“The result of this will be a worsening of the financial circumstances of the Korail,” he said. “After that, the government plans to separate freight transport, rolling stock maintenance and infrastructure maintenance from Korail, paving the way to private involvement in these areas as well.”

The president of Korail said splitting off the new KTX line has nothing to do with privatization.

“Private companies can’t be part of the subsidiary because we blocked their access,” said Choi Yeon-hye, the head of the state-funded company.

“Therefore, the union’s allegation is wrong.” She called the strike “illegal.”

Korail said it will keep 41 percent of the shares of the new operator, while the rest will be owned by state sector companies. The Ministry of Land, Infrastructure and Transport also urged the union to abandon its strike and return to work.

“The strike, which protests the launching of the new operator, has no legal justification,” the ministry said in a statement. “The ministry dispatched extra workforce to minimize the impact of the strike and they are all experienced, qualified workers.”

But many predicted a real impact on train services if the strike continues. The president of the union also accused President Park Geun-hye of hinting at privatization during her recent trip to France.

“After she made promises not to pursue rail privatization during her election campaign, in France Park Geun-hye promised to open the rail and subway markets to foreign capital,” Kim said.

Protests were held in Seoul, Busan, Daejeon, Gwangju and Yeongju. A total of 1,800 union members participated in Seoul and 7,000 around the country, according to estimates by the union.

The union of Seoul Metro, which operates subway lines 1 through 4 in Seoul and part of Gyeonggi, also decided yesterday to go on strike on Dec. 18 in order to throw its support behind the Korail protest.

The controversy began as the city’s urban development committee confirmed plans to build a new KTX line in 2012 connecting Suseo to Pyeongtaek, Gyeonggi and Busan by 2015. The line will have an entirely new route between Suseo and Pyeongtaek, although the rest of the trip will be identical to current KTX lines.