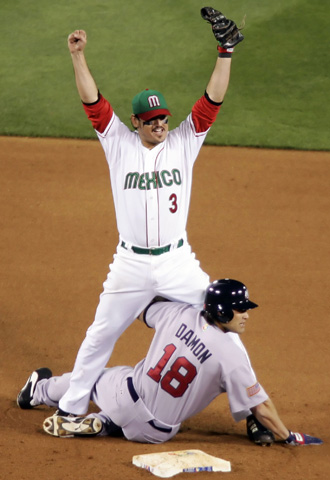 The revised rule means that each team is now able to start one pitcher and one hitter. The clubs also could have two batters in a game, but as most of them are lacking decent arms, they are predicted to have two pitchers and a hitter on their rosters.

The NC Dinos, the 2013 rookie team, and the KT Wiz, who will join the league from 2015 season, will be allowed to have four foreign players on their rosters. The Wiz, however, will not have any foreign players for next season as they will be in the Futures League.

Signing foreign players can often make or break a team’s entire season as they usually expect those foreign players to be at the top of their pitching rotations. There have been some big bats in the past, such as Felix Jose of the Dominican Republic, who averaged .309 and hit 95 home runs, with 314 RBI in four KBO seasons with Lotte Giants, and Tyrone Woods of the United States, who became the MVP of the 1998 regular season and the Korean Series with 42 home runs, 103 RBI in the regular season and four home runs in the Korean Series with the Doosan Bears.

Since the mid-2000s, however, foreign hitters were hard to find as teams mostly filled their foreign player quotas with pitchers, and it took more time for hitters to adapt to the league than pitchers. But as the clubs are now allowed to have at least one imported bat in the lineup, signing a decent hitter has become an important issue for KBO clubs.

The teams that had a good start to the hot stove season, such as the NC Dinos and Hanwha Eagles, look like they are also leading the second round of the season.

The Dinos announced yesterday that they have signed outfielder Eric Thames, 27, who is on the Houston Astros’ 40-man roster. In two major league seasons, he averaged .250 and hit 21 home runs with 62 RBI. He was drafted by the Toronto Blue Jays in 2008 and hit 27 home runs on a triple-A team in 2010. He made his MLB debut in 2011 and was traded to Seattle in 2012. He played for two triple-A teams this season and hit .283, with 10 home runs and 49 RBI in 98 games. It looks like the Dinos have acquired an outfielder who was used as the fourth option in the outfield for a MLB club, meaning that Thames can be in the middle of the Dinos’ lineup.

“He has good eyes in the batter’s box and he can also produce some long balls,” said Bae Suk-hyeon, the Dinos’ general manager.

The problem with the Dinos is that their outfield is already a full house. They recently signed a four-year, 5 billion won ($4.75 million) contract with free agent Lee Jong-wook and they also have a rising star in Na Sung-bum, 24, who hit 14 home runs with 64 RBI in 104 games this season. If they utilize Thames as a corner outfielder, outfielder Kim Jong-ho, who hit .277 with 129 hits in 128 games, would lose his fielding position. The Dinos could consider putting Na at first base as they have been considering a way to give him more at-bats. Thames doesn’t have to be another Jose or Woods. About 25 home runs in the next season would be a satisfactory outcome for the Dinos.

The Eagles, another winner in the hot stove season, are about to get a big-name bat who used to play in the MLB. According to Fox Sports yesterday, the Eagles and outfielder Felix Pie of the Pittsburgh Pirates are close to a one-year deal. Pie averaged .246 in 425 MLB games and hit 17 home runs with 99 RBI. He also hit .293, with 76 home runs and 412 RBI in 847 minor league games.

This signing looks somewhat different for the Dinos because Pie obviously isn’t a guy who can hit 20 or 30 home runs in a season. He can hit sixth or seventh in the lineup because the Eagles have already signed the league’s two best leadoff hitters - free agent Lee Yong-kyu and Jung Keun-woo. Pie could be the leadoff hitter in the beginning of the season as Lee, who is currently in rehab, is expected to miss a few weeks. This signing looks like the Eagles wanted to improve their fielding, rather than their batting. During 374 games as an outfielder in the big leagues, Pie had 17 assists and had only three errors with a .996 fielding average.

The biggest concern for the Eagles, however, is pitching. Weeks ago, they decided not to re-sign their two 2013 season pitchers - Dana Eveland, whose ERA was 5.54, and Denny Bautista, whose ERA was 4.20. The Eagles’ team ERA this past season was 5.31, which was last among the nine KBO teams.

The Doosan Bears, who have been the biggest losers of the hot stove season, bought a big bat after losing their star players. They announced on Monday evening that they have signed a one-year deal with infielder Jorge Cantu. He hit 28 home runs in 2005 and 29 home runs in 2009 for the Tampa Bay Rays and also hit 31 home runs this past season for a Mexican League team. As he can play anywhere in the infield except shortstop, he is predicted to play either at first base or third base. The Bears recently failed to re-sign their first baseman slugger, Choi Jun-suk, and traded third baseman Yoon Suk-min after firing their manager Kim Jin-wook.

Cantu is to hit in the middle of the lineup, along with left fielder Kim Hyun-soo and designated hitter Hong Sung-heon. If Cantu brings what general manager Kim Tae-ryong is wishing for, it could soothe outraged Bears fans a little bit.

“The ball club expects Cantu to be another Tyrone Woods, who can hit more than 30 home runs with 100 RBI per year,” a Bears spokesman said. “It is true that we have lost some good players, like center fielder Lee and shortstop Son Si-heon, but we think Cantu will fill up the blanks well. He is a high-quality imported bat for sure.”

Previously, KBO teams have signed veterans players who are mostly over 30 and who couldn’t find a new team until the MLB spring training camp. Purchasing those free agents was more like gambling for KBO teams.

But it looks like the teams are changing their strategies in signing foreign players. The contract each player signs with a KBO team is identical - a one-year, $300,000 deal - but no one in the country believes the amount.

It looks like the teams are offering more money to these younger and better hitters with MLB experience through the foreign branches of their mother companies that are widely spread overseas. But no matter how much money they pay them, each team has to consider spending more money to acquire better players. It looks like another interesting money war has begun.

“Teams that had finished at the bottom of the league, such as the Hanwha Eagles, Kia Tigers and Lotte Giants certainly need to find a decent bat from a foreign league to improve their batting lineup,” analyst Ha Il-sung said.

“It is only one player, but he could bring his team to the next year’s postseason.”