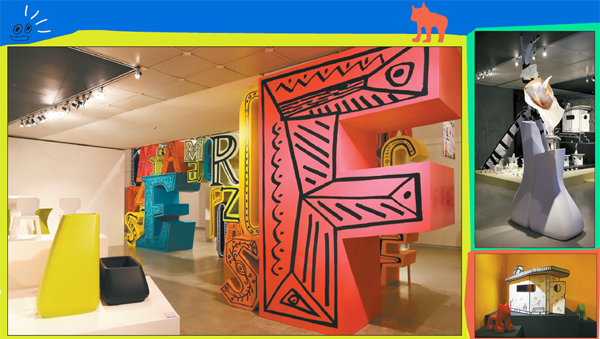 Clockwise from left: Mariscal created the alphabet letters M and O in sculptures because sometimes he forgets his wife’s name - Monica: Spanish designer Javier Mariscal used waste products from his solo exhibition at Hangaram Design Museum of Seoul Arts Center in southern Seoul to create this impromptu artwork. Provided by Hyundai Card: The designer created “Villa Julia,” a toy house created for children to assemble and color as they please. His artworks are well known for considering children.

Javier Mariscal, a 63-year-old Spanish artist, sees his latest exhibition at the Hangaram Design Museum of Seoul Arts Center as a large sketchbook for his designs.

“This exhibition is a good example of how we can communicate and play at the same time to have a better world and a better life,” said Mariscal with a serious look.

Yet unlike his serious look, he bolted from his seat and gushed out his thoughts, along with exaggerated gestures and funny expressions. It surely was the face of an “art player,” a phrase he uses to refer to himself because he thinks art is play.

“Children communicate through sophisticated play without words,” he said.

He is famous for creating the mascot “Cobi” for the Barcelona Olympics in 1992. He expanded the domain of his design through collaborations with global companies like H&M, Camper, Hello Kitty and Absolute Vodka.

He also co-directed the 2010 animated feature-length film “Chico and Rita” with Spanish director Fernando Trueba. It was the first time a Spanish full-length animated film was nominated for an Oscar for best animated feature.

Mariscal’s art is well known for its mischievous colors and unique forms, which challenge the conventional notion of art by crossing and combining various genres.

The uniqueness of his work may originate from the fact that he is dyslexic.

“When I was little, I wondered why everyone can read and understand letters so well when it was confusing for me,” he said.

Thus, he remembered things in the forms of spaces, colors and drawings.

“I sometimes even forget my wife’s name. So I created the alphabet pieces M and O, so that whenever I see them, I remember her name is Monica,” he said. 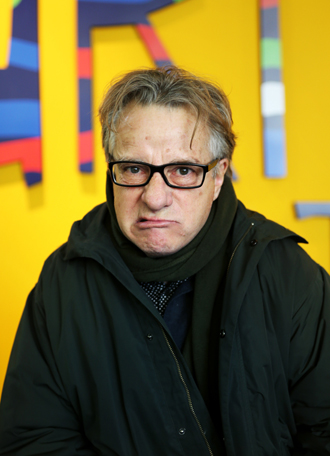 The Spanish designer Javier Mariscal makes a funny face while suggesting the notion that “art is play.”

As part of Hyundai Card’s culture project, the exhibition presents 1,200 pieces including furniture, interior design, sculptures, drawings and more. It is Mariscal’s first exhibition in Asia and his largest.

Once one enters the exhibition, there are sketches hanging that viewers must make their way through to get to the next part. He thought of the idea after he entered a Japanese bar. One can trace the origin of his art through the forest of sketches and drawings that motivated and led the artist to communicate.

“Art is the universal language. It is important for society and for humanity,” he said of art’s abstract yet clear ways of communicating.

In the “collage landscape” room, the artist presents the furniture and props he designed.

The last room, “colors parade,” includes a “Happy World” that was exclusively produced for this exhibition. It is the most colorful space among the three rooms, presenting the value of happiness that Mariscal wanted the audience to see.

“People stop playing after they grow old, and they tell others to be serious. I don’t believe in that,” he said firmly, stressing the value of fun and happiness. “Do what you like to do. That is important.”