A depressing ritual every five years

A depressing ritual every five years 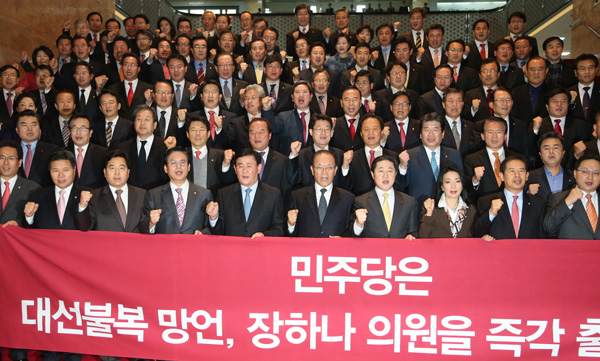 Lawmakers of the ruling Saenuri Party stage a protest in the National Assembly to demand the opposition Democratic Party expel its first-term lawmaker Jang Ha-na, who publicly declared that President Park Geun-hye should step down. [JoongAng Ilbo]

Ideological and cross-generational conflicts are cited as the biggest sources of deepening social fragmentation.

In a survey by the presidential Special Committee for National Unity, 74 percent pointed to the generational gap and 73 percent to ideological differences as the causes of social incoherence.

The findings are nothing new. The Dong-A Ilbo on Aug. 13, 1946, two days before the country celebrated the first year of liberation from Japanese colonial rule, carried a survey by the military government. A multiple-choice question asked what type of national system people preferred. The majority - 70 percent, or 6,037 people - chose socialism, followed by capitalism (1,189, or 14 percent) and Communism (574, or 7 percent). The rest answered that they didn’t know.

The number of respondents and their share do not exactly add up, but we get the general feeling at the time. Those who preferred socialism and Communism add up to 78 percent. It is understandable why some declined to make a choice when taking into account the complicated and confusing ideological climate at the time. The current ideological gulf may date back to those days.

Conflicts surface when the political landscape undergoes a shift. They bubble up through the chasms in power stratification during times of evolution. The victor tries to establish and cement new political order while the defeated vehemently resist. The grounds are ripe for ideological problems.

The Democratic Party is in the opposing corner right now. But the Saenuri Party has been in the same position. The conservative camp ganged up to impeach liberal President Roh Moo-hyun in 2004. The Grand National Party, as it was known at the time, mustered conservative forces to overturn the results of the 2002 election. It was an episode in which conservatives struck back to rein in expanding liberal forces.

The power balance reversed after conservative President Lee Myung-bak took office. Liberal forces joined up in nationwide protests against the new government in 2008 for its decision to allow U.S. imports of beef. The streets were decorated with banners and chants demanding the president step down. The mood has not reached that heated stage this time. It is just a few DP lawmakers and a group of civilian and religious activists who sing the mantra. But it is all deja vu.

In five years, we may see a replay of the scene even if the theme is different. It won’t matter if the Saenuri Party retains power or if the DP steals it. How many more votes the winner got also won’t be that important. If the two sides hate each other, that’s the end of the story. A loser doesn’t want to admit defeat.

But he may believe he could have won the game if it had been fairer. That’s why we have this endless - and tedious - extra time as in a football match, even though there is no referee to blow the whistle to proclaim time’s up.

In addition to a year lost to a lame-duck period during the final stage of the five-year presidential tenure, we may have to get used to this extra time in the presidential race. Do we have to go through this dreary ritual every five years?

One monologue by a TV hero in a hit drama is popular these days. He quoted a famous speech by U.S. Hall of Fame baseball player Yogi Berra who said, “It ain’t over ‘til it’s over.”

However, what’s over is over.

The first year of the new administration has been wasted on past issues instead of pushing ahead with policies to change the future.

A piece of advice to anyone who aspires to vie in the next presidential race: Sign an agreement to fully comply with the results before forming a campaign team. Election authorities could consider depriving any candidate - who declines to accept defeat - the eligibility to run in elections as well halting the government subsidies to such a party. Both the Saenuri and Democratic Party cannot complain as they could be the next in power.

Some people are so worried about the national state that they compare today’s crisis to the late Joseon period before its collapse in 1910. The geopolitical climate is ever darkening with escalating tensions among regional members and global powers, and yet the country is entirely engrossed in a domestic tug of war. Everything is stale and murky like winter skies laden with fine-particle clouds.

But we cannot just sit around sighing. We may have to squeeze out our biggest asset of positive will. We must fine-tune to find a balance in intelligence, will, pessimism and optimism. Politicians should have to call the quits in the dreary prolonged extra time. Otherwise, the people will have to end the game for them.