As economy sinks, divorces go up

As economy sinks, divorces go up 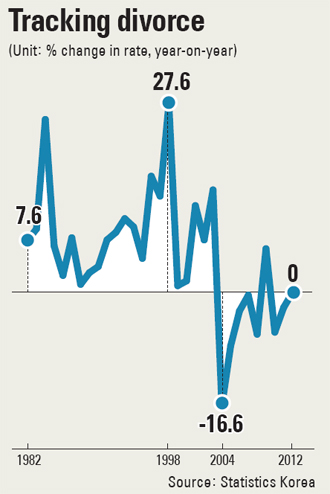 Is there any relation between economic crises and divorce rates?

A report by Statistics Korea yesterday found divorces started declining in 2004 after the country experienced a so-called credit card crisis, triggered by reckless issuance of plastic.

It is the first time the government agency analyzed divorce patterns of residents over a 30-year period.

In 1998, when the Asian financial crisis put thousands of men out of work, the divorce rate jumped 27.6 percent from a year earlier.

From 1997 through 2003, the rate jumped 10.6 percent a year. It averaged 4.1 percent annually from 2003 through 2012, indicating financial hardships affected the lives of married couples.

Introduction of a new law that mandates a waiting period before divorces can be finalized has helped lower the rate.

Meanwhile, along with the rising life expectancy, the number of second marriages increased to 565,000 last year. In 2012, 511,000 divorced men remarried, data showed.

The report also found 18,900 marriages between divorced women and men who were never married recorded last year, compared to 13,500 unions of divorced men and single women.

“As women’s social and economic status elevates along with rising life expectancy, women are more active in getting married again even after divorces,” Lee said.