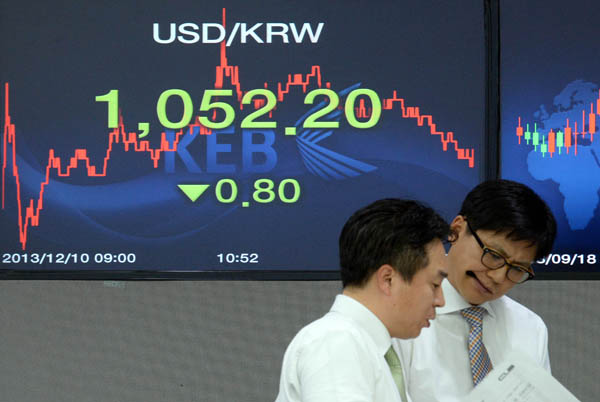 An electronic signboard at the Korea Exchange Bank in central Seoul yesterday shows the won at its strongest level this year. [NEWSIS]

For the second straight day, the Korean won set a high for the year against the U.S. greenback, despite a warning from the government.

The won has appreciated for five days on market expectations that the start of stimulus tapering by the U.S. Fed may not be imminent.

As the won edges closer to the 1,040 won ($0.98) tipping point on top of the weakening yen, concerns that the government’s recent currency exchange initiative might derail the recovering Korean economy have been growing as well.

The won yesterday closed at 1,052.2 against the greenback, after falling 0.80 won from the previous day. This was a follow-up to Monday, when it closed at 1,053, the highest this year.

The currency market in the morning started in a panic as the won appreciated to 1,051.5, the strongest in nearly three and a half years.

The appreciation of the Korean won comes even as Finance Minister and Deputy Prime Minister Hyun Oh-seok told reporters the government is closely monitoring the volatility.

The won, which appreciated to 1,070 against the greenback in September, has strengthened to 1,060 and 1,050 in the past three months, only making matters worse as the Japanese yen continues to depreciate and now is trading at 103 against the U.S. dollar.

By industry, transportation and equipment will see the sharpest loss in operating profit of 3.8 percent, while machinery will drop 2.5 percent. Electric and electronic industry operating profit can drop 2.3 percent.

The report claimed that exports account for 34 percent of manufacturers’ annual revenue and 20.3 percent for the industry overall.

For transportation and equipment companies, exports are 52.1 percent of revenue followed by electric and electronics with 50.4 percent.

“Recently, the Korean won is appreciating while companies’ profitability is worsening,” said Kim Cheon-koo, a researcher at the institute. “Among manufacturers, those that have a high dependency on exports and lack measures to counter the volatile exchange rate will see their profitability worsen.”

The researcher said the government needs to make a small adjustment in the won exchange rate while creating a system that could counter uncertainty in the market, as well as aggressively utilize its free trade agreements with major economies.

The Japanese yen’s depreciation already has weighed on Korean exporters, particularly automakers. In the first 10 months of the year, the local automakers’ combined sales in North America were 0.9 percent less than the same period last year.

During the same period, Toyota and Honda sales increased more than 8 percent, and Nissan surged 9 percent.

According to a recent study by the Hana Institute of Finance, when the yen weakens 10 percent against the U.S. dollar, Korea’s current account surplus would loose $21.7 billion over four years. As exports see a steeper decline, the current account surplus in the first year would be $5.4 billion less, $6.2 billion less in the second year and so forth.

Exports in four years would see an average 2 percent decline, while imports during the same period would drop 1.3 percent.

Spending from the private sector as well as investment on equipment and machinery would also decline. On average, private spending would see a 0.2 percent decrease, while investment would fall an average of 1.2 percent.

The threat of the strengthening won and the weakening yen comes at a time when Korea’s economic recovery is expected to continue throughout the fourth quarter, largely thanks to improving conditions in advanced economies including Europe.

“It has become evident that the euro zone has been moving away from an economic descent as it has turned around to a mild growth in the second and third quarters,” said Kim Seung-hyun, an economist at Daishin Securities.

Kim noted that while concerns over the U.S. tapering clouded markets across the globe in May, they stabilized in July largely thanks to the recovering European market.

The analyst said that if the U.S. Fed in its next week once again pushes back its reduction of quantitative easing, it would definitely help the Korean economy sustain its current growth momentum.

In the second and third quarters, Korea’s quarterly growth was a 1 percent increase, which exceeded earlier expectations.

Along with 21 consecutive months of current account surplus, there has been growing optimism that Korea might finally pick up, which has led to larger spending in the private sector.

According to the Finance Ministry, retail has been enjoying a brisk recovery. Hyundai, Lotte and Shinsegae Department Store last month saw a 5.9 percent increase in sales, which is a turnaround, while discount store sales increased by 0.8 percent, a turnaround from a 6.4 percent decrease in October.