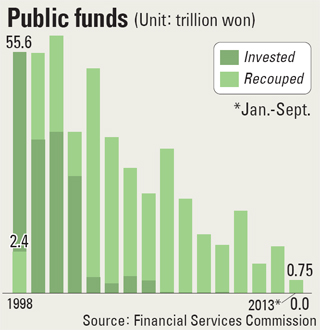 The recovery rate of public funds poured into ailing financial institutions during the Asian financial crisis in the late 1990s increased very slightly in the third quarter compared to the previous three months, the country’s financial regulator said yesterday.

According to the Financial Services Commission, state-run entities including the Korea Deposit Insurance Corporation retrieved a total of 167 billion won ($158.7 million) from July through September, expanding the total amount of return since November 1997 to 106.1 trillion won. During that period, the government provided a combined 168.7 trillion won in public funding and 62.9 percent, or 106.1 trillion won, has been recouped.

“The reason the recovery rate increased at a slower pace this year is because we have already sold, and therefore recouped, many large-scale funds through bids,” said an official from the FSC. “The only big one left in the process of privatization is the sale of Woori Financial Group.”