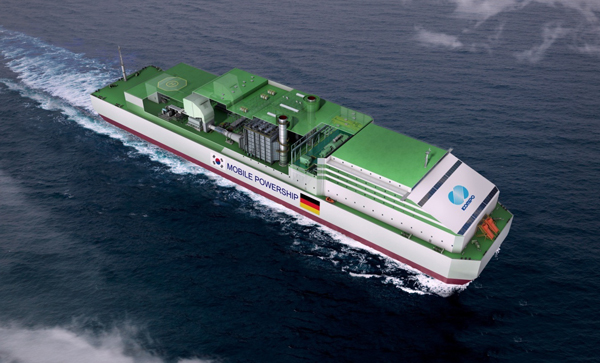 A computer-generated image of Mobile Powership, the world’s first floating power generator, to be developed by four companies. The exact size of the vessel isn’t yet confirmed. Provided by Hyundai Heavy Industries

Hyundai Heavy Industries, Korea Midland Power (Komipo), Polaris Shipping and Siemens Energy Solutions signed a memorandum of understanding at COEX Intercontinental Hotel in Seoul yesterday to develop a Mobile Powership, which will be the world’s first to have a power generating facility installed on a floating storage regasification unit (FSRU).

The consortium will inject a total of $940 million, and the ship is expected to be completed in December 2017.

Hyundai Heavy Industries will build the ship and Germany’s Siemens will supply the power generating facility. Komipo will be in charge of managing the power generator and Polaris Shipping will take care of the vessel’s operation.

“Mobile Powership is the world’s first invention to integrate a combined cycle power generating facility and liquefied gas storage in which a gas turbine and a regasification unit are directly linked to achieve curtailment of fuel costs,” a spokesperson from Komipo said.

Hyundai Heavy Industries, the nation’s top ship manufacturer, said it’s confident of its ability to build the powership since it integrates an LNG FSRU, which was first designed and built by the company, with a top-of-the-line combined cycle unit in the capacity of 880 megawatts.

Siemens, the only foreign company in the project, called it an “innovative business model.”

When compared to building a power plant on land, the powership is expected to not cause any complaints from nearby residents. In addition, the overall construction period will be shorter.

Once the business model is successfully launched in Korea, it is anticipated to have success overseas. Industry analysts are speculating that it could be exported to the Philippines, Indonesia, Brazil, and other countries where power shortages have become a critical issue.

In addition, it is anticipated that the project will firmly position itself as a business model well suited for Korean policies under the “creative economy” by generating approximately $2 billion per project, according to the consortium.

“Mobile Powership is a mobile power plant with a capacity to promptly manage natural disasters such as earthquake and flood,” said a spokesperson from Polaris Shipping, the world’s number one owner of VLOCs (very large ore carriers).

The four companies will launch a task force after signing the MOU.