Assembly breaks through its logjam

Assembly breaks through its logjam 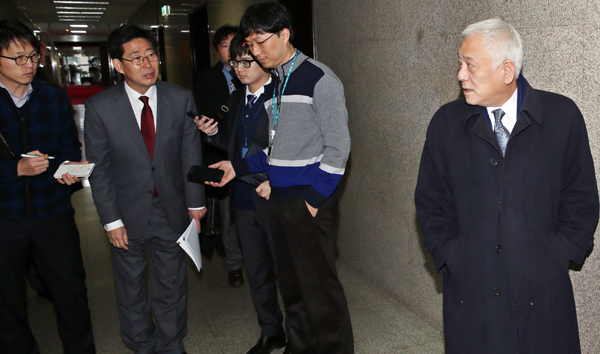 The logjam at the National Assembly finally gave way yesterday on the final day of the 100-day regular session, and three dozen bills were passed including a lowering of acquisition taxes that could wake up the comatose real-estate market.

Lawmakers also agreed to an extraordinary session that will start today and last until Jan. 13. They will work on more legislation like the national budget for 2014, which is already overdue.

But the accord almost didn’t happen. In the morning, the ruling Saenuri Party and opposition Democratic Party were at loggerheads and it looked like nothing would be accomplished.

In protest against two DP lawmakers’ harsh remarks about President Park Geun-hye on Sunday and Monday, the Saenuri yesterday morning refused to join a special committee devoted to reforming the National Intelligence Service and a special committee on the budget and accounts.

The DP has been insisting on the reform of the nation’s top spy agency after revelations that it allegedly waged a smear campaign against President Park’s rival, Moon Jae-in, before the presidential election a year ago.

The ruling party reversed its position in the afternoon and decided to join the committees, which brought normalcy to the Assembly, and the long-delayed bills were passed. In the afternoon, Saenuri submitted motions to expel DP Representatives Jang Ha-na and Yang Seoung-jo.

On Sunday, Jang said she couldn’t accept the “unlawful” presidential election of last year and demanded that President Park step down and a presidential by-election be held next June. Yesterday, Yang remarked publicly that Park’s father, former strongman Park Chung Hee, had been assassinated by his own spy chief and warned the current president not to court danger through her own actions.

The Saenuri Party objected vociferously to both batches of remarks and called for the lawmakers to be expelled. Representative Kim Do-eup, who submitted the motions on behalf of the Saenuri lawmakers, said in a briefing, “Representative Yang made remarks that could instigate an assassination of President Park and Representative Jang’s request to hold a by-election to replace Park is no different than demanding a suspension of the constitutional order.” He said the two lawmakers violated their oaths to abide by the Constitution.

The chance of the expulsion motion being passed by the Assembly is slim since it requires at least two-thirds approval. The Saenuri Party controls 155 out of 300 seats and the main opposition controls 127. DP Chairman Kim Han-gill made it clear in a meeting of his lawmakers that the party has no intention of publicly apologizing for the lawmakers’ remarks. But at the same time he warned of “firm measures against words and behavior that hurt and run counter to the party’s interest.”

“The Democratic Party thinks we should never do harm to the president under any circumstances and Representative Yang also said twice his comments have been distorted. Representative Jang has also stepped down from her party’s executive post as an apology for dealing a blow to the party after disclosing a personal stance that is different from the party’s platform,” he said. Apparently referring to the incidents, President Park expressed her regrets in a meeting with cabinet members yesterday.

“I assume the people can see that making excessive and violent remarks that incite division is never for the good for the country or the people, but is only for political bickering,” she said.