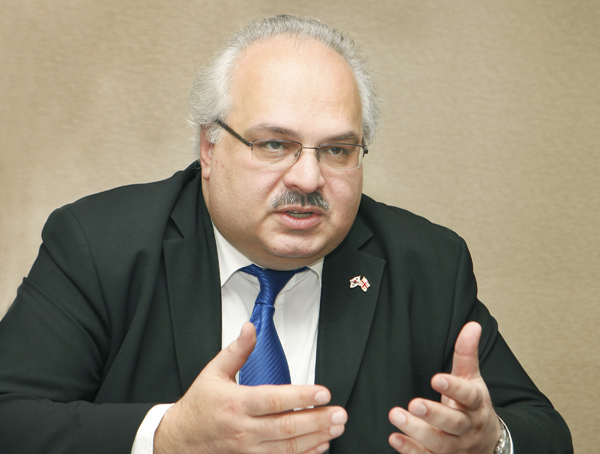 David Jalagania, Georgia’s deputy foreign minister, visited Korea on Monday for political consultations with his Korean counterpart Ha Tae-yeok, director of the Eurasia division of the Ministry of Foreign Affairs.

It was the second political consultation between Korea and Georgia, and the first time that a Georgian envoy visited Seoul.

“The two countries are geographically quite far away each other,” Jalagania said. “But we are aimed at diversifying foreign relations. One of the dimensions is an Asian dimension, and Korea is an important part of that.”

The issue of strengthening bilateral relations was discussed during consultations between the two foreign representatives in Seoul, Jalagania said.

“We discussed various bilateral agendas together. As the diplomatic relations between the two countries span more than 20 years, the field of mutual interest is also increasing,” he said.

“Korea and Georgia have worked on cooperating on a multilateral agenda and support each other’s candidacy in various international organizations,” he noted.

Last year marked the 20th anniversary of diplomatic relations between Georgia and Korea and, in 2011, Georgia decided to open its embassy in Seoul. Korea still has no full-fledged embassy in the Eurasian country.

“We shared each country’s opinion on the matter during the meeting,” Jalagania said. “Georgia understands the complicated circumstances, and one thing for sure is that opening a new embassy in Georgia is under discussion.”

“Many of Korea’s big companies have offices in Georgia and their products - electronic goods, cars and mobile devices - are all popular in the country,” he said. “We’d like to offer Georgia’s geopolitical location to our Korean partners as the country is located between the East and West. And we also have a very open, liberal economic policy, which will facilitate the investment or operation of foreign firms.”

He said that the two parties also agreed to support the creation of closer relations through exchanges of high-level visits and strengthening contacts in the private sector.

The deputy minister also mentioned the government’s move to initial an EU Association Agreement at a summit of the EU’s Eastern Partnership in Vilnius, Lithuania, last month, a move that analysts said will bring Georgia closer to the Western world.

“We are very motivated to sign the agreement soon, and we are ready to take the steps required as soon as possible,” he said.