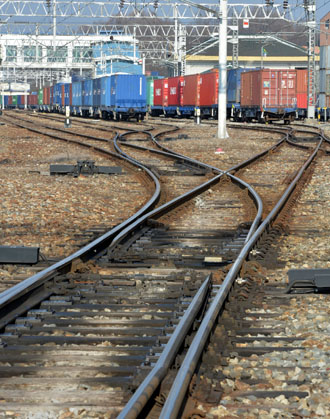 On the second day of the Korea Railroad Corporation’s nationwide strike against a management decision to set up a subsidiary to run a bullet train line, cargo trains are idled. [NEWSIS]

In an escalating standoff between the state-run railway operator and its union, the Korea Railroad Corporation (Korail) announced late Monday that it will dismiss a total of 4,356 union workers involved in the strike.

Korail also filed complaints with the police against 194 unionized workers for neglecting their duties at work.

“We decided to remove all of the 4,356 union members who took part in the strike from their positions to better deal with the strike as soon as possible,” said Jang Jin-bok, a spokesman for Korail.

Stretching into its second day yesterday, the strike failed to prevent the railway operator from passing a proposal during a board meeting to introduce a new subsidiary to run a new bullet train line.

The union cried foul over the board’s decision and vowed legal action.

“The board members’ decision is invalid, and we call for its cancellation,” said Choi Eun-cheol, spokesman of the Korean Railway Workers’ Union. “We will keep on fighting. We are going to file an injunction to nullify the decision on Dec. 11 and sue the board members the following day.”

The spokesman added that the strike will not be called off unless the board members withdraw their approval.

Under the approved plan, Korail will keep 41 percent of the shares of the new operator, while the rest will be owned by public sector companies.

The president of Korail said splitting off the new KTX line is intended to boost competitiveness and reduce the financial burden on the debt-ridden public company, emphasizing that private companies are not allowed to hold shares of the new operator.

As for the firing of the 4,356 workers involved in the strike, the union said in a statement that “there is no legitimate reason to dismiss the workers. Korail just tries to force the workers to stop the strike and return to work.”

Disruptions of passenger and freight services are inevitable.

Only 56 percent of Saemaul (express) and 66 percent of Mugunghwa (regular) trains operated yesterday.

The major concern lies in freight transport services, which were curtailed to 37 percent of the normal volume as of press time.

Korail deployed some 6,000 substitute workers and most of them were dispatched to bullet train service.

Tensions will continue to rise in the railway company as the union of Seoul Metro, which operates subway lines 1 through 4 in Seoul and part of Gyeonggi, also decided to go on strike on Dec. 18.