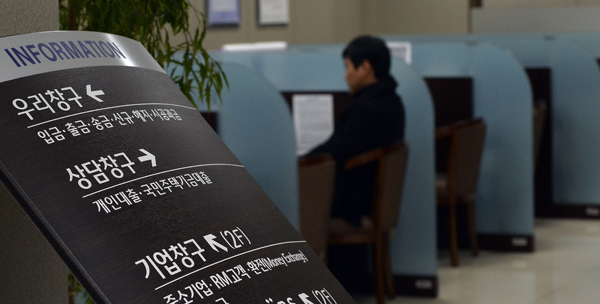 A customer consults with a bank employee about a household loan at a bank branch in Seocho, southern Seoul, yesterday. Household loans in October reached a new monthly record of 676.1 trillion won. The National Assembly passed a bill lowering the real estate acquisition tax yesterday. [NEWS1]

The air was heavy with pollution blown in from China. A realtor walked a client to her car parked near Garden Five in Songpa, southeastern Seoul, on Thursday.

“This neighborhood is really the hot spot nowadays, and there are a lot of people interested in investing in real estate, mostly officetels,” said the realtor in her 50s. “Even with bad weather like today people keep knocking on my car,” she said.

No wonder: it is plastered with posters of an officetel, or a dual-purpose building used for both commercial and residential purposes, that will start construction in the near future. 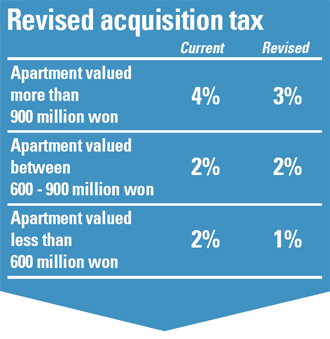 On the weekend, long lines formed at a makeshift model home built in front of Garden Five, where a court and law firms will be relocated and housing is scheduled for development.

A homeowner in his 40s said he has been getting calls from realtors asking if he is interested in selling his apartment in Jamsil for 950 million won ($903,490). That’s an attractive offer - the value dipped as low as 800 million won in the last couple of years.

“Those calls really made me wonder if it’s the right time to sell,” the homeowner said. “I mean, what if the market freezes again and this is as good as it gets?”

Signs that the real-estate market is finally coming to life are evident across the country thanks to lawmakers trying to permanently lower the acquisition tax.

After the 2008 global financial meltdown, the local real-estate market froze, and the biggest losers were owners of apartments of 85 square meters (101.7 square yards) or bigger. The Lee Myung-bak administration tried various measures to boost the market with little success because almost all were temporary.

In August, the Park Geun-hye administration announced a plan to lower the acquisition tax to help potential buyers, who have been holding back until prices fell. One result was the price of jeonse, or long-term housing deposit rentals, skyrocketed.

Since then the market started to revive, especially as the possibility of the acquisition tax being lowered came closer. To cover the losses local governments may suffer from the reduced acquisition tax, lawmakers also passed a bill that raises consumption taxes. Starting next year, the local consumption tax will be 11 percent, up from the current 5 percent.

Also in the revised bill, apartment buildings that are 15 years or older will be allowed to be remodeled to add three more floors from April. 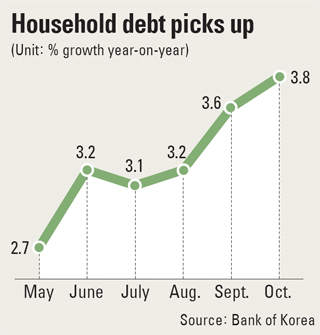 Mortgages were increased 2.3 trillion won to total 411.4 trillion won. This was exceptional growth considering only 700 billion won was added the previous month.