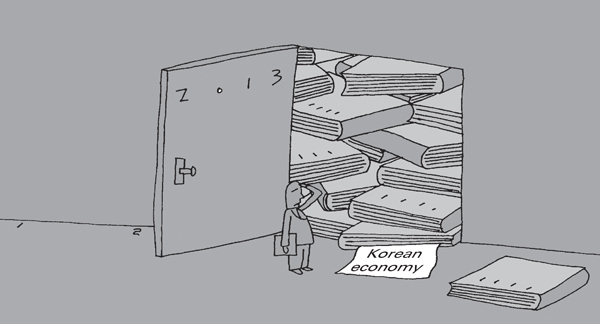 We are already halfway into December. With just one page left on this year’s calendar, the air has turned frosty, hurrying the year toward its end. During this time, it becomes a habit to look back as we sum up the year with a self-evaluation and prepare for the new one. Some may be proud of surpluses, while others have to carry debt into the coming year with a heavy heart.

How has the Korean economy done this year?

In numbers, it has fared well. It actually has done better than expected. The economy is estimated to have grown 2.8 percent year-on-year in 2013, bettering the 2 percent increase in 2012. The current account surplus is likely to hit a record high this year thanks to brisk exports. Consumer prices rose a mere 1.2 percent year-on-year, well within a stable range, while prompting some to warn of deflationary risk. On data alone, South Korea has managed to hoist up its economy and stash a massive surplus in the international account while keeping consumer prices stable.

Despite positive signs in the economic data, however, the lives of ordinary people and businesses have hardly picked up. The economy has grown and inflation is low, but people do not have enough to spend. First of all, the growth is illusionary. This year’s expansion is against last year’s meager growth. Growth has been led by exports as domestic demand remains suppressed. This is why there has been no improvement in individual income. Household income in real terms edged up 0.3 percent year-on-year in the first quarter, 1.3 percent in the second and 1.6 percent in the third, hovering below the gross domestic product increases of 1.5 percent, 2.5 percent and 3.3 percent in the same quarters.

GDP figures do not necessarily translate into real recovery, and since personal income lagged behind overall economic growth, it is not surprising that people cannot feel that the economy has gotten better.

The truth behind the numbers tells a gloomier story. Both household and government debt are snowballing. President Park Geun-hye has declared a new economic target of 70 percent overall employment, but at the current snail’s pace in hiring and recovery, that goal is slipping further and further away. People are stumbling under heavy debt and looking for jobs that cannot be found. Tax revenue is falling, worsening the government’s fiscal state. The real estate market - that could add some traction to a recovery in domestic demand and ease consumer debt - is sinking further and further. These reasons are why it has felt like an economic winter all throughout the year.

Is there any hope in the coming year? Domestic and foreign economic institutes forecast the Korean economy could expand in the mid-3 percent range. In short, the economy is generally expected to do better. The International Monetary Fund estimates world economic growth to accelerate to 3.6 percent next year from this year’s estimated 2.9 percent. The export-dependent Korean economy may pick up on overseas recovery.

But there are downside risks. First of all, there are no reliable signs indicating substantive, meaningful growth in the global economy. It remains to be seen whether the U.S. economy will continue to improve after the Federal Reserve starts to reduce the massive scale of money it has pumped into the economy since the financial crisis of 2008-9. Apart from the United States, major markets in the eurozone, China and Japan show mixed signals. Developing economies are entering a slowdown. Second, even with the pickup in the global economy, Korea’s economy won’t improve much without fixing its export-reliant structure. Consumer lives and businesses won’t be any different even with improved data.

The Korean economy has somehow muddled along. But it has not solved any of its problems. The Park government in its first year neither provided a new growth vision for the economy nor has it taken any action to correct structural problems. The first half has been spent on “economic democratization” to reduce qualities as promised during the campaign, and the second half on arguing over a new pension scheme and tax revision. It has not yet gotten to the urgent task of shifting the economic structure to be more domestic-oriented by deregulating and promoting the services sector.

The National Assembly helped little by neglecting review and approval of key economy-related laws because it was too busy fighting about past issues. The laws, however, wouldn’t have altered the big picture. Without a fundamental and visionary growth strategy to break free from a structural slowdown, the local economy remains at the mercy of external factors. It is why few have hopes for next year.