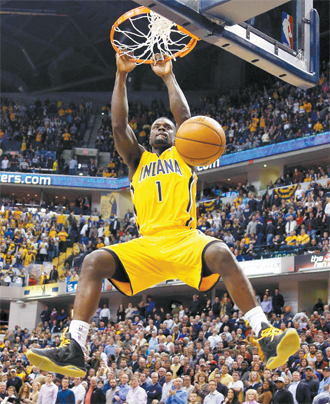 Roy Hibbert scored 24 points and Paul George had 15 of his 17 points during a second-half rally to lead the Pacers past Miami, 90-84, Tuesday night in a matchup of the Eastern Conference’s top two teams. Indiana improved its league-best record to 19-3 and extended its lead to three full games by beating Miami at home for the fourth straight time.

LeBron James led the Heat with 17 points, 14 rebounds and six assists but had only three baskets and nine points over the final 36 minutes. Dwyane Wade also scored 17 for Miami, which has now lost three of five.

“It was fun, a real intense game,” George said. “Both teams were playing at a high level. You could see an urgency to win this game tonight.”

The Heat led by 13 in the first half and didn’t trail until Hibbert completed a three-point play with 6:12 left in the third quarter to put the Pacers ahead, 58-57. But with George heating up, Hibbert dominating the middle and Indiana’s bench playing solid, Miami couldn’t tie it or take the lead again.

The difference for Indiana, as usual, was the third quarter.

Only this time, the knockout punch came with much more significance against the two-time champs.

Indiana, which made a late charge from a 13-point deficit late in the first half to close to 47-40 at halftime, opened the third with back-to-back baskets, including the Pacers’ first 3-pointer of the game to close the deficit to four. Indiana finally tied the score at 55 when George Hill hit a 3 with 8:15 left in the third.

Hibbert’s second three-point play of the quarter finally gave Indiana its first lead, 58-57, with 6:12 to go, and then George went to work. The NBA’s No. 4 scorer managed only two points in the first half and made his first basket with 3:51 to go in the third but still managed to score 12 in a quarter that the Pacers took a 68-64 lead.

The surge didn’t stop there.

When Hibbert returned early in the fourth, the Pacers immediately went to him on back-to-back possessions, starting the decisive 12-6 run that gave Indiana an 82-74 lead with 4:59 to go. “It’s just one game,” Hibbert said. “We’re going to learn from it. It’s a learning experience. It’s still early in the season. We have a lot more work to do.”

It sure didn’t look like things would end this way when the game began. Miami took control quickly by double-teaming George and getting physical with him and Lance Stephenson to force them into an array of bad shots and early miscues. The Heat jumped to a 13-7 lead and followed that with an 11-0 spurt to make it 28-15 late in the first.

Indiana’s overhauled bench, rebuilt to contend with Miami in a seven-game playoff series, trimmed the deficit to 32-25 early in the second quarter. But after Miami’s starters returned en masse, the Heat went on an 8-2 run to rebuild a 44-31 edge, and the Pacers finished the half on a 9-3 spurt to close to get within seven before taking control in the third and pulling away late. “I thought we brought it tonight,” James said. “We know they’re a very good defensive team. I thought they hit some tough shots and they attacked the rim real well but even though they had us down by 10 rebounds, I thought we rebounded well and we battled.”