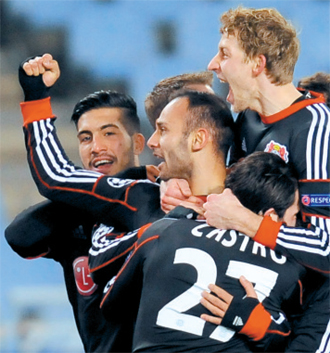 Leverkusen’s Omer Toprak, center, celebrates his goal against Real Sociedad, during their Champions League match in Spain on Tuesday. [AP/NEWSIS]

Prolific Ronaldo took his tally to nine for the campaign in Real’s 2-0 win at FC Copenhagen, with the nine-time champions also setting an all-time record in European competitions by netting in 31 successive matches.

Ronaldo, in his first game back since sustaining a muscle strain on Nov. 23, scored with a simple close-range finish three minutes after the break, Real’s second after Luka Modric’s opener.

Bayern manager Pep Guardiola suffered only his second loss in 25 matches since taking over from Jupp Heynckes.

A heavy loss looked on the cards for City when slack defending allowed Thomas Mueller and Mario Goetze to fire the German side ahead, 2-0, after 12 minutes.

David Silva started the comeback with a simple finish to reduce the deficit by the break and James Milner won a penalty, converted by Aleksandar Kolarov, and side-footed the winner in a three-minute second-half spell.

Leverkusen’s 1-0 win at Real Sociedad put them through as runners-up behind Manchester United in Group A.

The Bundesliga side’s victory, earned by Oemer Toprak’s second-half goal, lifted them above Shakhtar Donetsk into second after the Ukrainians lost, 1-0, at United.

In an extraordinary match, the Belgians finished with eight men after the Greeks scored one penalty and had two saved by keeper Silvia Proto, including one from Saviola.