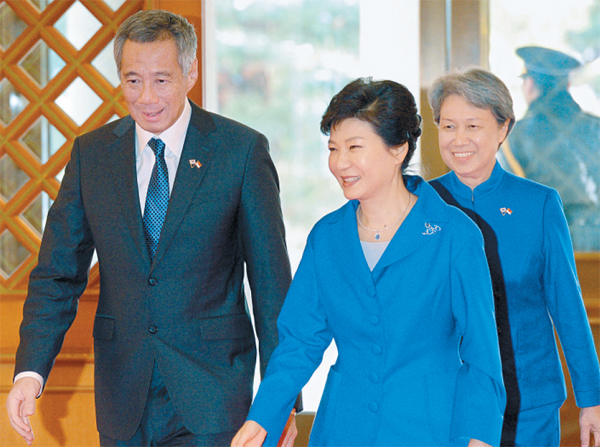 President Park Geun-hye held a summit yesterday with Singaporean Prime Minister Lee Hsien Loong in which the two leaders agreed to step up cooperation to advance development and construction projects in the Association of Southeast Asian Nations (Asean) bloc.

Korea’s strength in manufacturing, information technology and construction, combined with Singapore’s edge in finance and logistics, could produce synergy effect in the region, which is already integrating railroads, energy infrastructure and information and communications technology.

“Although the global economy is still going through trouble, Singapore has been sustaining high economic growth on the back of [Prime Minister Lee’s] excellent leadership,” said the president, greeting her Singaporean counterpart. “[Both countries] have achieved economic progress on the basis of great human resources despite a shortage of natural resources. Now we are faced with the common task of taking yet another leap in terms of creativity and innovation.”

She suggested that Korea and Singapore work toward strengthening future-oriented cooperation. Lee, in return, acknowledged that Singapore has been keeping an eye on Park’s “creative economy” campaign.

Park and Prime Minister Lee met two months ago on the sidelines of an Asean summit in Brunei. Lee’s wife, Ho Ching, who is better known as the chief executive officer of Temasek Holdings, also attended yesterday’s meeting.

Lee arrived Tuesday and is set to leave Seoul today after dropping by Samsung Electronics’ Digital City in Suwon.

The Korean government hopes to participate in projects led by Singapore, which will see the construction of new mega-cities in China and Southeast Asian nations. It also hopes Singaporean financial enterprises will invest in large-scale, Korean-run infrastructure and plant building projects across Southeast and Central Asia.