Rivers back in town with Clippers and a vengeance

Rivers back in town with Clippers and a vengeance 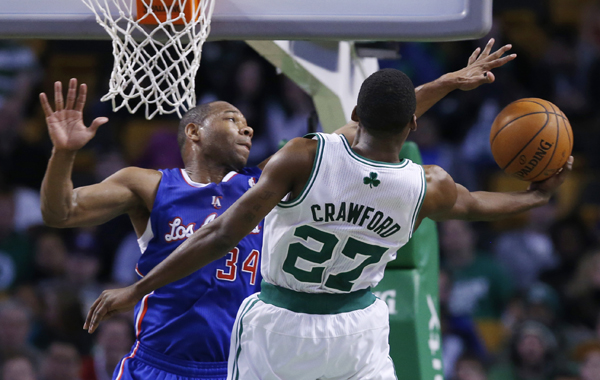 Los Angeles Clippers guard Willie Green, left, reaches to block the shot of Boston Celtics guard Jordan Crawford in the second half of an NBA game Wednesday in Boston. [AP/NEWSIS]

Doc Rivers has picked up another win in Boston.

The coach who led the Celtics to the 2008 NBA title returned for the first time with the Los Angeles Clippers on Wednesday night and beat Boston 96-88. Jamal Crawford scored 21 points, hitting a pair of 3-pointers 23 seconds apart to help the Clippers pull away in the final three minutes.

“It was just a really nice day,’’ said Rivers, choking back tears in his postgame news conference. “This is, it’s just such a classy place here .?.?. They cheer for their teams and they love their athletes. The best decision I ever made was 10 years ago, when I decided to come.’’

Chris Paul had 22 points, nine assists and seven rebounds, and Blake Griffin scored 18 points for the Clippers, who won for the seventh time in 10 games. Reunion week resumes for Rivers on Thursday, when he faces former Celtics Paul Pierce and Kevin Garnett - now with the Brooklyn Nets.

“It was a really special win,’’ Crawford said. ‘’You could see his emotions. I don’t know what he was going through inside.’’

Jeff Green scored 29 points against his former coach, who was traded to Los Angeles last summer for a first-round draft pick. Jordan Crawford had 20 points and nine assists, and Brandon Bass had 17 points and 12 rebounds for the Celtics, who lost their second in a row.

“It wasn’t emotional,’’ said Green, one of just a handful of Celtics remaining from last year’s team. “We were just trying to win a game, plain and simple.’’

The Celtics lost to Brooklyn on Tuesday night, facing two of the stars who brought an unprecedented 17th championship to Boston. One night later, Rivers returned to the TD Garden, where the banner for the 2008 title hangs from the rafters.

Rivers got a standing ovation when he walked onto the court for warm-ups, another healthy cheer when he was introduced and a bigger one after a video on the scoreboard ended with, “Thank you, Doc!’’

Rivers did just fine, getting 34 points from his bench to just four for Boston’s. The Celtics led by as many as nine points in the first half, but the Clippers erased it in a back-and-forth third quarter in which the lead changed hands five times.

Los Angeles led 73-71 midway through the fourth quarter when Darren Collison scored six straight points. The Clippers had an 85-83 lead with under 3 minutes left when Crawford made back-to-back 3 pointers. Boston cut it to five on Jordan Crawford’s 3-pointer, but never got closer.

The Celtics opened a nine-point lead late in the half, but took a 45-39 lead into the break. The teams traded leads in the third quarter, which ended with the Clippers ahead 66-64.

DeAndre Jordan caused a jump ball in the first half when he tried a slam dunk but got it caught between the rim and the backboard.