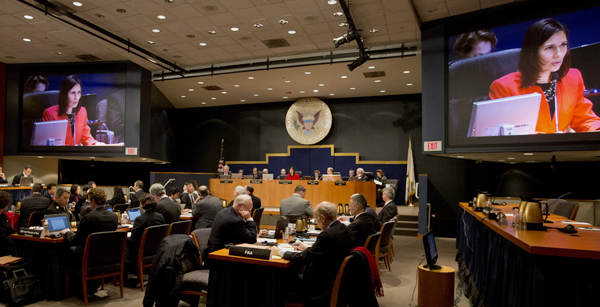 Deborah Hersman, the National Transportation Safety Board’s chairwoman, speaks during an investigative hearing Wednesday in Washington on the crash landing of Asiana Flight 214. The two-dozen witnesses at the hearing included representatives of Asiana, Boeing, the Federal Aviation Administration and the Korean government Office of Civil Aviation. [AP/NEWSIS]

An Asiana Airlines captain nervous about making a manual landing in San Francisco inadvertently disabled a speed-control system before the plane crashed into a seawall on July 6, documents show.

Lee Kang-kuk, a veteran pilot with Seoul-based Asiana who was being trained on the Boeing Co. 777-200ER wide-body, had momentarily adjusted the power without realizing the plane’s computers then assumed he wanted the engines to remain at idle, according to information released Wednesday at a U.S. National Transportation Safety Board hearing.

The documents, while showing the pilots made errors, raise questions about how auto-throttles on Boeing planes are designed and whether there’s enough training on using them. The safety board hasn’t concluded what caused the crash, which killed three teenage girls from China in the first fatal U.S. airline accident since 2009.

Lee, 45, “believed the auto-throttle should have come out of the idle position to prevent the airplane from going below the minimum speed” for landing, the NTSB said in a summary of an interview with him. “That was the theory, at least as he understood it.”

In most modes of operation, the speed-protection system on the 777 and several other Boeing aircraft won’t allow planes to slow too much, safeguarding against accidents such as the Asiana crash. The plane, on the verge of losing lift because it was almost 40 miles per hour slower than its target speed, broke apart after hitting the ground.

In some combinations of auto-throttle and autopilot settings, such as during Asiana Flight 214’s approach to San Francisco, the system becomes dormant, according to NTSB documents.

The three pilots in the cockpit didn’t sense the impending danger until seconds before impact, according to NTSB documents and a voice-recorder transcript made public at the hearing.

Bong Dong-won, 40, a crew member on board to give the pilots a rest break, said at least twice that the plane was descending too quickly in the final minute, according to the transcript.

Lee and Lee Jung-min, 49, an instructor pilot monitoring the captain as part of his training on the 777, failed to abort the landing after the plane descended below 500 feet (152 meters), as is required under airline rules, according to the documents.

No one commented immediately after a series of chimes 11 seconds before impact indicated that the plane had reached a dangerously low speed, according to the transcript.

Shortly after the plane descended below 50 feet, the control column began shaking to warn pilots they were in danger of losing lift, known as an aerodynamic stall, according to the recording.

Only then, 8.5 seconds after the initial speed warning, did Lee command to abort the landing and climb, according to the transcript. The pilots added power too late to prevent the collision.

Lee Kang-kuk, asked about his approach to the airport, told safety board investigators it “was very stressful, very difficult.” He wasn’t accustomed to landing without an instrument-landing system guiding him to the runway, as pilots had to do in San Francisco that day because of airport construction, according to an NTSB summary of his statement.

The captains still work for Asiana though not flying, Suh Ki-won, an Asiana spokesman, said in an email. Bong, the relief pilot on Flight 214, has resumed flying.

Asiana since the accident has increased the hours of flight-simulation training its pilots receive and taken other steps to make a “fundamental improvement” in safety, Akiyoshi Yamamura, senior executive vice president of safety and security management, said Dec. 3.

Two former Asiana pilots said in interviews that most of the carrier’s crews were uncomfortable with manual flight maneuvers, according to NTSB documents. The pilots gave a similar account in interviews with Bloomberg News in July.

Autopilots, automatic throttles and computerized navigation systems have helped improve safety in recent decades, the FAA study concluded. The price for that is occasional confusion because the systems, which sometimes interact with each other, may be improperly set or act in ways that crews don’t anticipate, it said.

“Obviously that’s an issue of great interest to the NTSB as well as the entire aviation community,” NTSB Chairman Deborah Hersman said at a press conference.

The devices are so reliable that pilots tend to assume systems like speed control always work, Captain Dave McKenney, of the International Federation of Air Line Pilots Associations, said in testimony today.

“When it doesn’t, they get caught short,” McKenney said. McKenney was a co-author of the FAA study.

As Flight 214 from Seoul neared San Francisco, Lee Kang-kuk, the training pilot, entered a series of parameters into the flight-management and auto-throttle systems that made the plane think he wanted to accelerate and climb.

To counter the plane’s increase in thrust, he pulled the power back so he could resume his descent, documents show.

Because of the way the auto-throttle had been set, combined with the fact that he had shut off the autopilot, the throttles stayed in the lowest setting, according to the NTSB.

The impact sheared off the tail section and engines, according to the NTSB. Besides the three passengers who died, more than 200 people were taken to hospitals. The plane held 291 passengers, 12 flight attendants and four pilots.

All three victims may have been flung from the plane, according to statements of unidentified witnesses who were traveling with them, the NTSB said. At least one girl wasn’t wearing her seat belt, a student seated nearby said.