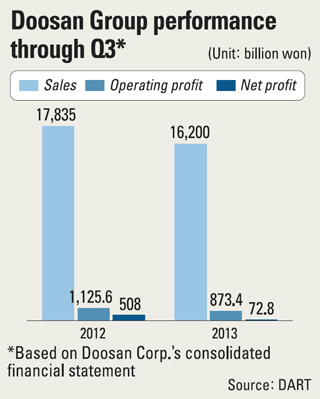 Doosan Group is moving forward to improve its financial healthiness as affiliates of the nation’s 12th-largest conglomerate come up with plans to raise cash.

Doosan Heavy Industries, the core and largest company in the group, said in a regulatory filing yesterday that it sold 9.5 million of the 16 million treasury shares the company held on its balance sheet for 302.3 billion won ($287 million).

The company announced after the market close on Wednesday it would sell shares in order to improve its financial condition. Although shares of Doosan Heavy Industries yesterday plunged to 4.48 percent to 32,000 won, officials from the industrial plant builder said the move will drop its debt-to-equity ratio from 216 percent to below 200 percent.

The treasury stock sale by Doosan Heavy Industries is the latest move by Doosan Group affiliates.

On Tuesday, Doosan Infracore, a construction equipment maker, announced it will raise $400 million by selling global depositary receipts (GDR), or certificates of stock ownership, to foreign investors at $10.31, or 10,857 won, per share. The GDRs represent about 38 million shares of common stock and will be listed on the Singapore Exchange on Dec. 20.

Doosan Infracore says the move will lower its debt-to-equity ratio from 305 percent to 250 percent. The company is still burdened by debts from its takeover of U.S. construction equipment maker Bobcat in 2007.

Furthermore, last week Doosan Engineering and Construction decided to raise 400 billion won through the issuance of redeemable convertible preference shares (RCPS) for third-party allocation. The builder had trouble issuing corporate bonds due to its falling credit rating and must repay 1 trillion won worth of debt in next two years.

Doosan Group, led by Chairman Park Yong-maan who also heads the Korea Chamber of Commerce and Industry, in recent years has been suffering hard times because of a slump in the construction and machinery industries, as well as loans for previous M&A deals.

According to data from the Financial Supervisory Service, the group’s cumulative net profit through the third quarter plunged 85.6 percent year-on-year. Among major affiliates, only Doosan Heavy Industries and Doosan Corporation turned a net profit. Analysts said that the first phase of financial restructuring of Doosan Group seems to be done, although it will have to see whether the conglomerate conducts asset revaluation for its affiliates in the near future.