NIS proposes its own reform idea

NIS proposes its own reform idea 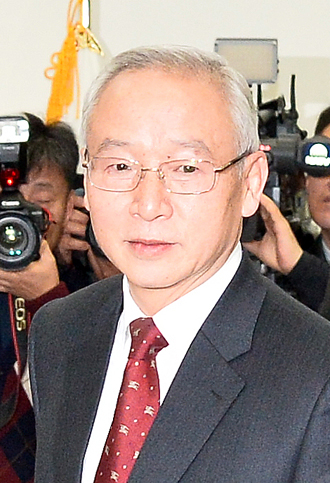 Nam Jae-joon, director of the National Intelligence Service, attends a meeting of the special committee to reform the spy agency in the National Assembly yesterday. Nam submitted his own reform plan to the committee yesterday. [NEWSIS]

Nam Jae-joon, director of the National Intelligence Service, submitted to the National Assembly yesterday a plan for reforms at the agency amid growing demand from both the opposition Democratic Party and the general public for more political neutrality.

“I offer my regrets to the people for the National Intelligence Service becoming the center of controversy after it caused trouble by interfering in the presidential election,” he was quoted as saying by Kim Jae-won, a Saenuri Party lawmaker and the assistant administrator of the bipartisan National Assembly committee devoted to overhauling the agency.

“Even though the NIS is an agency guarding national security that is fundamentally prohibited from meddling in political matters on the basis of the law and the democratic system, it has yet to earn a sufficient level of confidence from the nation,” Kim quoted Nam as saying at a press conference.

The 69-year-old former Army chief, who was appointed in March, promised to stop sending NIS intelligence officers (IOs) to the National Assembly, political parties and media outlets to gather information. It would continue assigning IOs to government departments and civic organizations, he said.

Among other reform plans, Nam said the NIS would step up the level of punishment for political interference and require that all its workers pledge not to meddle in domestic politics. NIS employees will be banned from registering with any political party within three years of retiring from the agency.

The special committee was established after the ruling Saenuri Party and opposition Democratic Party leaders reached an agreement last week. It has an equal number of members from both parties and is chaired by Representative Chung Se-kyun, a fifth-term Democratic Party lawmaker.

The agency has been accused of interfering in last year’s presidential campaign by conducting an online smear campaign against Democratic candidate Moon Jae-in. The NIS is also suspected of disclosing a behind-closed-doors conversation between former President Roh Moo-hyun and North Korean leader Kim Jong-il at a 2007 summit in Pyongyang, which became an issue in the campaign that harmed Moon.

The NIS has been at the center of a political struggle that has gone on for almost a year, fueled by its alleged intervention in domestic politics. On July 1, the National Assembly created a committee to conduct its own probe into the scandal for 45 days and the DP as well as President Park Geun-hye demanded a large-scale reform of the agency in the same month.

The president has repeatedly stressed that she did not ask for any help from the NIS in the last presidential campaign.

Nam also pledged to boost NIS information gathering on North Korea and its capability to cope with cyberspace warfare. However, he raised objection to the two parties’ idea of strengthening the National Assembly’s control over how the NIS uses its budget. Both parties had agreed earlier to legislate a related bill by the end of this year.

“Our budget is already controlled by the Assembly,” he said. “No spy agency in the world has ever disclosed details of how its budget is used because if it is made public, the agency’s organizational structure, information-gathering capacity and spying activities are exposed.”

Responses from the two parties were mixed. Whereas the Saenuri Party focused on minimizing amendments of the NIS Act or enactment of new laws, the Democrats wanted substantial amendment of the NIS Act.

The special committee is set to discuss which part of the NIS Act should be amended next Thursday.