Iraq buys $2.1B worth of Korean jets

Iraq buys $2.1B worth of Korean jets 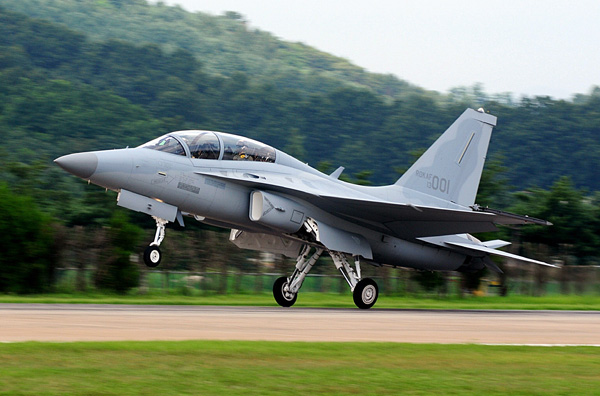 Korea Aerospace Industries (KAI) President and CEO Ha Sung-yong said yesterday it has won its first bid to export the FA-50 fighters, and the contract has been signed by Iraqi Prime Minister Nouri Kamal al-Maliki.

“This was an opportunity to confirm Korean aircrafts’ global competitiveness,” Ha said, “and the potential of our aviation industry’s exports.”

The FA-50 fighters, called T-50IQ for the version exported to Iraq, will have radar capabilities, air-to-air and air-to-surface missiles, machine guns and precision guided bombers, among other weapons capabilities.

The estimated $1.13 billion contract doesn’t include pilot training and maintenance or other systems needed for the operation of the aircraft. They are expected to boost the deal to a total of $2.1 billion over 25 years.

The deal surpasses the previous largest defense export, Daewoo Shipbuilding Marine Engineering’s contract in December 2011 to export three 1,400-ton Chang Bogo-class submarines equipped with torpedoes and guided missiles worth $1.08 billion to the Indonesian Navy. The submarines are expected to be delivered between 2015 and 2016.

Aerobatic and combat variants of the T-50 lightweight advanced trainer have been developed, such as the T-50B, TA-50 and FA-50.

This Iraqi arms deal provides a gateway into arms exports to the Middle East.

Lee Myeong-hwan, a public relations official for KAI, said, “There was fierce competition to win this deal against the U.K., Czech Republic, Russia and others.”

He added that Korea has expanded its aircraft exports to the Middle East following its T-50 deal with Indonesia in 2011, a contract to deliver 40 KT-1 trainer jets to Turkey signed in 2007 and 20 KT-1 jet exports to Peru signed in 2012.