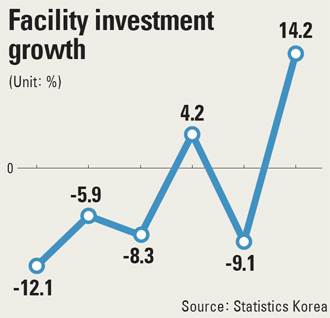 The government yesterday came up with its fourth trade and investment promotion plan, which includes deregulation in education, medicine and employment.

This is the fourth time the Park Geun-hye administration has held the meeting this year since May 1. In that time, only three out of more than 200 proposals involving business investment deregulation have reached the parliamentary floor, essentially reducing the effectiveness of the gatherings.

President Park presided over the fourth meeting at the Blue House, attended by about 180 government officials and experts from the private sector.

“Owing to the government’s efforts to promote investment and exports through this meeting for the fourth time this year, facility investment started rebounding for the first time in six quarters, and the number of newly employed people increased from around 400,000 to 580,000 last month,” Park said at the meeting.

While touting the government’s efforts, Park expressed concerns about the delayed passage of key economic recovery bills pending at the National Assembly.

“It is clear that if we miss this chance, it will be harder to revive the economy, aggravating the public’s economic hardships,” she said. “I’m worried about the possible cancellation of important investment bills like the foreign investment promotion bill. Such bills related to the livelihoods of the people shouldn’t be the target of political wars.”

The president highlighted the importance of deregulation in the service industry that has the potential to further investment and job creation.

According to the fourth plan, the government will allow investment by foreign medical and educational institutions.

In the medical industry, 848 medical corporations across the nation will be able to receive investments from venture capital firms and foreign businesses for profit-making businesses from next year.

Owners of Gil Hospital, Cha Bundang Medical Center and Eulji Hospital are best suitable for deregulation. They will be able to roll out various businesses, ranging from medical equipment and accommodations to cosmetics and health supplements.

“Medical companies will be able to reinvest profits from new businesses in expanding facilities or improving management,” said an official at the Ministry of Strategy and Finance.

With the announcement, the privatization of the medical industry has resurfaced as a hot political topic. However, Deputy Prime Minister Hyun Oh-seok underscored that the latest measure to allow medical companies to run profitable businesses wouldn’t mean the government would privatize the entire industry.

“The government is not considering the privatization of the medical industry at all,” Hyun said at a press conference yesterday. “Although medical companies are allowed to participate in profit-making businesses, the public characteristics of the industry will be maintained.”

Regarding the educational industry, in eight economic free zones, including Songdo, and Jeju Island, foreign educational institutions can create campuses or subsidiaries.

On employment, the government decided to expand financial support for companies that currently adopt the wage peak system, and allow more jobs for workers over 55.

Currently, workers over 55 have been able to find jobs through headhunting agencies primarily in the manufacturing and logistics sectors.

“Measures that need legislative changes will be handled in the first half of next year, but those that can take effect in the form of executive orders will be carried out as soon as possible to help maintain the current economic recovery trend,” said deputy finance minister Jeong Eun-bo.

Through this meeting ? a legacy of the late President Park Chung Hee ? the government has pinpointed 211 investment projects across different industries that could have direct effects on the economy, including those in the manufacturing, tourism, medicine and education sectors, which were held due to regulations related to the environment and small and mid-size businesses.

The Korea Development Institute estimated in a report that the first three investment promotion plans could generate about 27.5 trillion won worth of investment over the next five years if the projects are carried out smoothly. The amount could add about 22.6 trillion won to the country’s gross domestic product.

Of the plans, 41 projects are in need of legislative procedures, but only three ? foreign investment promotion, tourism promotion and industrial land use ? are still pending at the National Assembly.

The government plans to continue to hold the meeting every quarter next year, but whether the meeting will have any effect on the economy remains to be seen.

Most experts view the government’s effort as meaningful, in that the meeting has been an opportunity to break regulations that kept various business investment projects stranded for years. But some point out that it hasn’t been enough to persuade lawmakers.

“Deputy Prime Minister Hyun once blamed lawmakers for not passing the bills, but it is up to him and other government officials to make more active efforts to persuade them,” said Sung Tae-yoon, an economics professor at Yonsei University.