Kongnamul gukbab, or bean sprout rice soup, is one of the most popular hangover soups in the country. It was first made in Jeonju.

The end of the year is near. The season in which people drink way more than they usually do has arrived, as people prepare to enjoy year-end parties with colleagues, old classmates, friends and family. You might be drinking lots of different types of alcohol such as soju, wine and beer. After having a fun night, the food you will look for the next morning - if you are living in Korea - will be haejangguk, or hangover soup.

“There are tons of different haejangguk,” said novelist Lee Moo-young. “Some people say a bowl of Vietnamese pho is good hangover food, and some say having chocolate would help in relieving hangovers, but I still think the best way to relieve a hangover is haejangguk.”

Professor Joo Young-ha of the Academy of Korean Studies, who is also the author of “Korean History on a Dining Table,” said the culture of haejangguk is related to the development of restaurants. Joo said that cities were modernized during the Japanese colonial period, and people around the nation and diverse types of merchants gathered in Seoul. 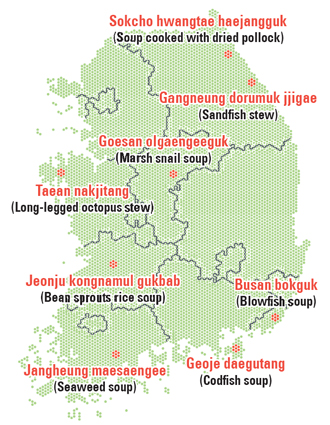 Along with the changes, restaurants were opened for porters and laborers, who enjoyed some alcohol with their meals after finishing work. Helping people appease their hunger while reducing the effects of intoxication is how haejangguk came to be a part of the culture.

Each region has its own style of haejangguk.

In eastern regions like Gangwon, people use seafood ingredients such as hwangtae (dried pollock) and dorumuk (sandfish). People in Jeolla enjoy using bean sprouts, mudskippers, eels, mudfish and small octopuses. In the Gyeongsang provinces, mulhoe, a dish of various sliced raw fish and vegetables dipped in a slightly frozen broth, is a popular hangover food for fishermen. Another popular option is bokguk, blowfish soup. On Ulleung Island, people use squid to make haejangguk.

This page will introduce eight styles of haejangguk that are popular nationwide. They were chosen because they are all served in traditional Korean meal style - with a bowl of rice and side dishes.

Gomchi (moray eel) haejangguk, which was traditionally a popular style, was eliminated from the list because that species of eel has become hard to find on the Korean Peninsula.

Instead, haejangguk using daegu (cod) and maesaengee (a type of seaweed) have become popular recently.

So, after you’ve enjoyed having some drinks with your good people, here are some dishes that could relieve your hangover and heat you up during the chilly weather.

Be careful, though. You might find yourself looking for another bottle of soju after you’ve eaten one of these haejangguk.

In Yeongdong (eastern Gangwon), people enjoy eating a spicy soup using pollock, which can easily be found in the East Sea. Pollock has moved to northern areas as the temperature in the sea has increased recently, but it is still a popular ingredient for Gangwon residents. Fishermen sail close to Russian waters to catch pollock, and the fish are sold to haejangguk restaurants in Inje County.

One restaurant, Hwangtae Yeonga (#033-635-8828), is owned by Lim Sung-ja, 53, who said she doesn’t use hwangtae caught in Chinese waters as they have a stronger, fishy smell. They offer a hwangtae haejangguk meal that is served with a bowl of rice and neat side dishes for 13,000 won ($12.30) per person. It is recommended for those who can’t deal with spicy soups.

Fishermen in Gangwon knew winter was approaching every year when they started catching sandfish. The dorumuk spend most of their lives in the deep water of the East Sea but move to coastal areas to spawn.

Most of the restaurants in Jumunjin Port in Gangneung and Cheongcho Port in Sokcho usually sell soups or stews that use sandfish as a main ingredient between October and December. It can be grilled on a pan, but a better way to enjoy it is to have it as a stew, especially in the winter.

After putting the fish in a pot with some radish and spicy sauce and boiling it, the pot soon provides a hot and spicy soup.

Olgaengee is a South Chungcheong type of daseulgi (marsh snail), a popular ingredient for people in inland areas. They sometimes season it with vegetables and sometimes use it as an ingredient for buchimgae (pancake). But the best way to enjoy it is to cook it in a stew with doenjang (bean paste) and herbs. It’s recommended for those who have trouble dealing with spicy food. Oh Sung-in, 67, who grew up in Goesan, North Chungcheong, said he had a sleepless night every time his mother went out to collect marsh snails in the evening, as he was excited to have that soup the next morning. “Having a breakfast with a bowl of hot soup on a chilly morning always made us happy at that time,” he recalled. Mat restaurant (#043-833-1580) and Seoul restaurant (#043-832-2135), both serve olgaengee soup for 7,000 won per person.

Long-legged octopuses prepare for winter by eating more food as the temperature goes down. During those periods, the octopuses can be found at mud flats because they have stored enough food to survive during winter. In Taean, locals usually use flesh from the gourds as an ingredient, instead of radishes. They believe this makes the soup better. The best way to enjoy this stew is to eat octopus that was first blanched in boiling soup cooked with vegetables, including gourds, and add chopped noodles. “People first find this stew to relieve a hangover, but they later find some soju, as they are a perfect fit for each other,” said Ahn Guk-hwa, 55, who has been running Ewon restaurant since 1986. 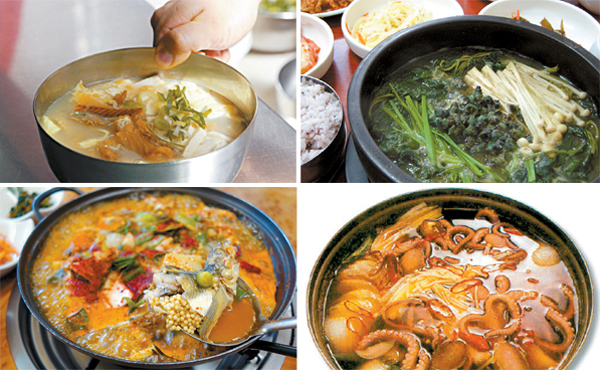 Kongnamul gukbab in Jeonju, North Jeolla, was born in a traditional market in Nammun. Its one essential ingredient is bean sprouts. Restaurants selling the rice soup grow their own bean sprouts with seeds raised in Imsil County, and make basic soup water with anchovies, dried pollock and sliced tuna with bean sprouts, which helps people relieve their hangovers, as the sprouts contain asparagines, a type of amino acid. Once a person swallows the cooked soup, he or she feels their body heating up. Having sour kimchi with it or putting Cheongyang powdered red pepper on it makes it spicy. Restaurants there serve it with two boiled eggs. It has been a tradition for a long time for those who come to markets in the very early morning on an empty stomach. Hyundai-ok (#063-228-0020, 6,000 won per dish) Sambaekjib (#063-284-2227, 5,000 won).

Jangheung, South Jeolla, produces 45 percent of the maesaengee distributed in Korea. Winter is always welcome to people there. Maesaengee are only found in South Jeolla regions, including Jangheung, Wando, Goheung, Haenam and Gangjin between mid-December and March, when the sea temperature drops below 20 degrees Celsius (68 degrees Fahrenheit), and the best quality seaweed comes from Ogam-ri in Jangheung.

Since a “well-being” lifestyle has been a big issue from the early 2000s, the price of maesaengee has became more expensive than seaweed. It contains many healthy nutrients, including diverse types of minerals and vitamins, which are also good for relieving hangovers. Oysters and tteok, or small rice balls, make a good combination with maesaengee.

The region that is famous for this dish is Geoje Island, South Gyeongsang - and the best quality fish are the ones caught between late November and December. Since the output of codfish rapidly decreased in the late 1970s due to overfishing, the city government of Geoje launched a project of discharging fertilized eggs of the species into the ocean in 1981, along with the cities of Changwon, Goseong, and Namhae. With those efforts, the codfish output started increasing in the past few years. Only about 9,000 codfish were caught in 2003 but already about 1 million codfish have been caught this year.

In Geoje, people generally cook daegutang by combining codfish with radish, gulfweed, garlic and red pepper. The average price per dish in restaurants there is about 15,000 won.

People in Busan say the last dish they must have after drinking is bokguk. This is one popular way to relieve a hangover in seaside areas, from the East Sea to Namhae, the southern sea. “Some dishes that were sold in a Japanese restaurant during the Japanese colonial period became a common menu,” said food columnist Park Sang-hyun. “Bokguk is one of them.” A famous restaurant named Chowon Bokguk is always crowded with people coming from outside the region. Since blowfish isn’t a type of species that produces broth when it is boiled, making a good broth is important. Restaurants there usually make broth by boiling water with anchovies and the heads of dried pollock. 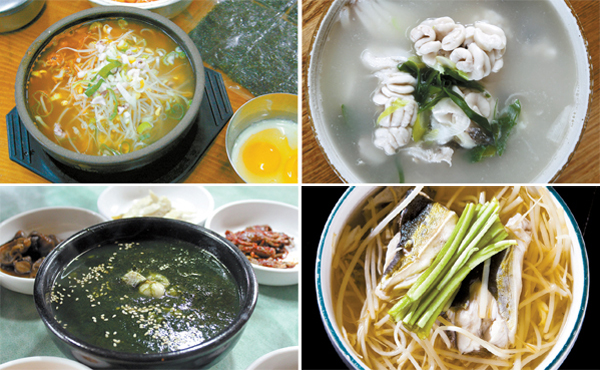