New Lexus IS 250 a worthy challenger

New Lexus IS 250 a worthy challenger

The third-generation IS 250 is available in three models, starting at 47.9 million won (45,600 dollars). Provided by the company

In Korea, Lexus can be seen as a lonely fighter against the German premium brands that dominate the import car market. The luxury brand from Toyota does have a solid reputation here for quality and comfort, but apparently that hasn’t been enough against the German cars’ image as being both luxurious and dynamic.

But, when it comes to the new generation IS, it could be a different story.

The new swift and sporty IS 250 introduced in June has brought a much anticipated and exciting matchup into its segment, going head-to-head with the BMW 3 Series, Mercedes-Benz C Class and Audi A4.

And while the IS 250 is not in the same league as the German trio when it comes to sales, it is a more-than-worthy competitor. The IS 250 is different, not only from German cars, but from other Lexus models as well.

The new IS 250 is a huge improvement from the first-generation IS introduced in 1999 and the second in 2006.

The first thing people will notice about the IS 250 is its distinctive hourglass-shaped grille, which the company likes to call the “spindle grille.” This has become a trademark for the new Lexus design. 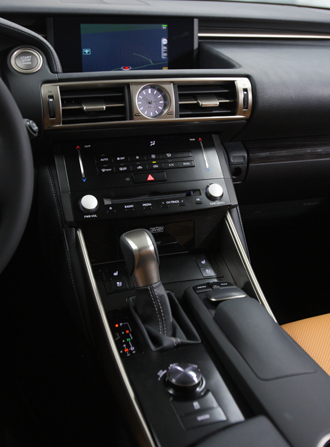 The car’s dynamic nature can be seen from the side, as the character line curving from below the door carries to the sexy taillights, whose outer edges wrap around the side of the car. Overall, the exterior design of the IS 250 is less flashy compared to the Germans.

The interior of the IS 250 is acceptable, but it is not in the same league as other Lexus models when it comes to luxury. The dashboard offers so little storage that it can be difficult to stash a mobile phone and wallet.

Another head scratcher is the new mouse-like “remote touch” controller. It looks very cool at first because you are basically moving a mouse to operate the on-screen infotainment system, but sitting behind a wheel is not the same as sitting behind a desk. The system is cumbersome, to say the least. Simply programming and entering my destination was more difficult than performing the same task on a touch screen, if easier than using the dials on some German cars.

For passengers, the rear-drive IS 250 hits a home run. While earlier editions were mainly criticized for a lack of cabin space, the latest IS 250 is 8.5 centimeters (3.3 inches) longer and 1 centimeter wider, and the wheelbase has been extended by 7 centimeters to 2.8 meters (9 feet 1 inch).

Of that, 5 centimeters were used to enlarge the backseat space and, along with making the front seat thinner, Lexus said 8.5 centimeters of additional space has been created.

However, the backseat is only comfortable enough for two people, because the transmission tunnel renders the middle seat largely unusable for adults. 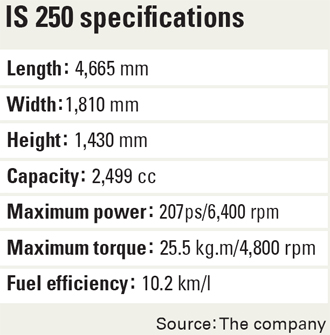 While driving, it is easy to feel that the IS 250 is, after all, a Lexus. The noise, vibration and harshness protection of the car is exceptional. Even at high speeds, wind noise is not intrusive.

Unchanged from the previous generation IS 250 is the engine. Lexus says it decided to retain the V6 2.5-liter engine because it best suits the vehicle.

What is different is the car’s suspension and body, Lexus says. While lowering the weight of the car, its new laser screw and adhesive body-bonding techniques, along with additional spot welding, have substantially increased overall body rigidity, according to the automaker.

Apparently, this improvement is most apparent on curvy roads, where the car doesn’t “shake” a lot and responsive steering allows easy control of the vehicle. The lower position of the driver’s seat also adds to the sporty feel.

Those who anticipated a bullet-like performance might be disappointed. The new IS250, while still smooth and fast, generates a maximum torque of 25.5 kilograms per meter that falls short of the competition.

The IS 250 comes with both a paddle shifter and a dial behind the gearshift that allows drivers to select from four modes, including “snow.” For the new IS 250, Lexus highlights that the model is fun to drive, and that is no exaggeration. For those who want Lexus comfort with speed, the IS 250 definitely stands out.

The vehicle also increases anticipation for other IS models coming to Korea in future, including the powerful IS 350.

The IS 250 version sold in Korea comes in three models, with the basic Supreme edition priced at 47.9 million won ($45,600); the F Sport, which many dubbed as a model that inherited the DNA of Lexus’ supercar LFA, at 53.3 million won; and the Executive at 55.3 million won.