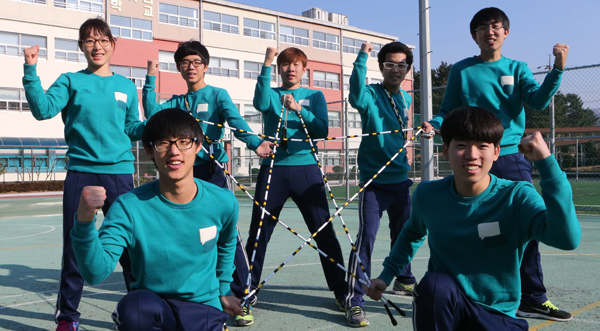 Members of Echo Ssing Ssing, the winners of the youth circle award at the Ninth Youth Prospective Growth Awards, pose for a photograph on Dec. 4 at Maery School in Ulsan. By Song Bong-geun

Members of a musical jump rope team from a school in Ulsan were the winners of the youth circle award at the Ninth Youth Prospective Growth Awards, held on Dec. 6 at MBC Dream Center in Ilsan, Gyeonggi.

The ceremony - co-sponsored by the JoongAng Ilbo, the Ministry of Gender Equality and Family and MBC - awards groups and individuals who contribute to the creation of a “teenager-friendly environment” in which young adults can more easily fulfill their dreams, according to the hosts.

The seven-member jump rope team, also known as the Echo Ssing Ssing, from Maery School in Ulsan, had long dreamed of skipping in rhythm.

It took them an entire month to master a single three-minute song. But perhaps most amazing was that none of them could hear the music - all seven members are deaf.

“They can’t hear,” said the club’s instructor, Park Jeong-ri, 45. “But they feel the music by heart, looking into each other’s eyes and sharing the rush of emotions.”

The teens in Echo Ssing Ssing have hearing disabilities of at least a second level, meaning they can’t hear sound without the help of a hearing aid. Onstage they don’t wear the device, as it can easily detach during physical activity.

The secret to overcoming the silence, they say, is to memorize the steps through their heartbeats.

Echo Ssing Ssing has already risen to stardom in Ulsan, where they have performed more than 30 times for local institutions and schools.

They have been honored 10 times in various national competitions and art festivals.

“Jump roping has instilled a sense of confidence in them,” said Sohn Woon-rak, 25, the school’s social welfare worker.

But the biggest reward to their hard work was not the news headlines or winner’s title: It was positive spirit. “When people cheer for me, I feel alive,” said Lim Kyu, 18, of the team.