Lee Jong-rim lives his life the ‘way of the sword’

Lee Jong-rim lives his life the ‘way of the sword’ 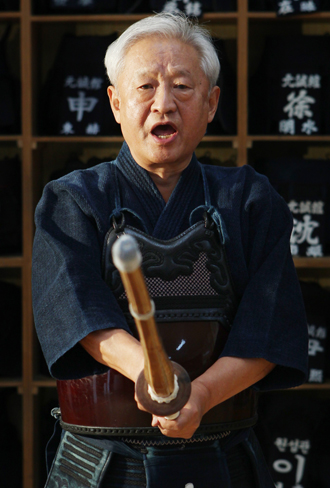 The boy could often hear the thunderous shouts resonating from the studio. And it was a sound he grew to like. On his way to and from school, he would watch through the window as the men - police officers - practiced, sparring with swords, refining their techniques.

The boy found it almost magical.

So one day, he apprehensively knocked on the door and asked the men how he could learn. Little did he know that this one bold question would start him on a path that would profoundly affect the future of Korean martial arts.

That boy, only 15 years old then, was Lee Jong-rim. Now the president of the Korea Kumdo Association, he is known as kumdo’s “living textbook.”

The martial art, closely linked with Japanese kendo, primarily deals with sword work. Through sparring and focus on physical technique and body posture, practitioners are able to own their movements and achieve a mastery of their weapons.

This year, the Korea Kumdo Association celebrates its 60th anniversary, and Lee’s life has essentially run parallel to the organization, with his achievements as a competitor and his research nourishing it from the ground up. Earlier this year, he was appointed for the first time as head of the association by his counterparts, who recognized his struggle to establish a proper path for kumdo in its native country.

“I’m thrilled to greet the 60th anniversary of Korean kumdo,” said Lee in an interview last month at a martial arts studio in Seoul.

Today, kumdo - which means “the way of the sword - has more than 600,000 trainees across 700 studios nationwide. In its early days, it was mostly practiced by soldiers and police officers. Lee was first introduced to kumdo in Busan during the 1950-53 Korean War. Later, he went on to win the 39th National Sports Festival in 1958.

After becoming the first Korean to win an international award-? a bronze medal - at the World Kendo Championship in 1973, he struggled to establish the history and theories behind Korean kumdo. Kumdo is commonly associated as a Japanese martial art, a belief Lee found frustrating; in recent years it has also been used as a blanket term to refer to any kind of Korean martial art based upon swordsmanship.

By studying ancient documents, Lee discovered that kumdo’s origins lay in Korea. The shape of the swords used before the 11th century, he argued, was identical to those used during the Three Kingdoms period.

“It’s true that Japan set up the framework of contemporary kumdo,” he said. “But before the Japanese word ‘kendo’ settled in, the Korean word gyukgum [fencing] was used. And now, Korea is the only country that uses its own word, ‘kumdo,’ to refer to its historical background.”

Lee hopes to have kumdo recognized as an Olympic sport by 2020.

“People commonly consider kumdo a noble sport,” he said, “but it is more accurate to say that it improves people.”