Prosecutors go after head of Hyosung

Prosecutors go after head of Hyosung 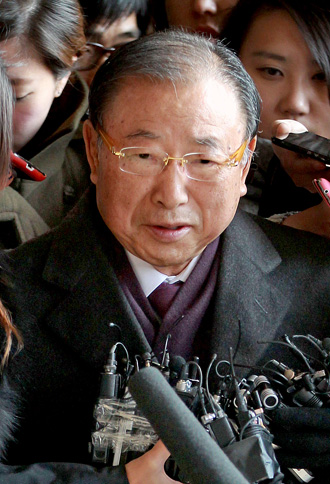 The request came after the 78-year-old owner of Hyosung Group was grilled on Tuesday and Wednesday over charges that he was behind massive alleged tax evasion and embezzlement at the company. Cho’s group is suspected of cooking its books for more than a decade to cover losses incurred during the 1997 financial crisis. Through 1 trillion won ($952 million) worth of creative accounting, the group allegedly evaded hundreds of billions of won in corporate taxes.

Private family funds were allegedly mixed with corporate money in slush funds, prosecutors claim. The tycoon’s family was also allegedly involved in a series of illegal financial transactions using third-party names. Cho acknowledged some of the charges during the questioning, but claimed he did it to save the company during the foreign-exchange crisis 16 years ago, according to the prosecutors. The chairman and top officials at Hyosung are also accused of having accumulated assets worth 100 billion won in other people’s names through accounting fraud to avoid paying taxes.

The chairman is also suspected of having embezzled 23 billion won from the group’s Hong Kong branch.
Cho Hyun-joon, the chairman’s oldest son and president of Hyosung Group, was questioned for two days on Nov. 28 and Nov. 29. Cho’s second-oldest son, Hyun-moon, was also investigated by the prosecution early last month.