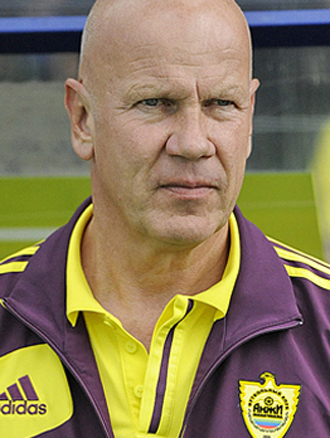 Coach Hong Myung-bo of the Korean national football team will have a foreign staff member with European league coaching experience. According to Netherlands media yesterday, the Korea Football Association is close to sealing an agreement with Ton du Chatinier, 54, former coach of FC Utrecht of the Eredivisie (Holland league).

The report said Chatinier and the KFA are discussing details about the contract, and the KFA will likely announce the deal officially this week. The KFA also confirmed that the report is true, saying Chatinier will be a part of the Taegeuk Warriors in the 2014 Brazil World Cup.

Chatinier will likely work on improving the team’s defense as it struggled against European teams composed of robust players. The Taegeuk Warriors will face world No. 11 Belgium, No. 22 Russia and No. 26 Algeria in the group round matches that kick off in June.

After the 2011 season, Chatinier joined Russia’s FC Anzhi Makhachkala under former Korean national team Coach Guus Hiddink’s leadership and worked as one of Hiddink’s staff members. Chatinier and Hong met each other when Hong joined Hiddink for five months for a coaching program.

“Algeria will be a relatively easy opponent not only for us but also for Belgium and Russia,” analyst Shin Mun-sun said. “If we predict that Belgium will advance to the second round as the winner of the group, the other second-round spot from the group will be decided by the match between Korea and Russia.”

“Participating in a World Cup event must be great,” Chatinier was quoted as saying. “I think it would be another great moment in my career as a coach.”