Will Choo get what he wants?

Will Choo get what he wants? 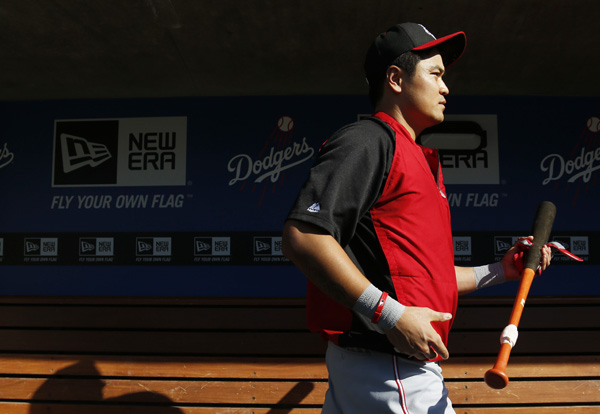 Can Choo Shin-soo be the first Asian player with a 100 million dollars deal or he is another Michael Bourn? [NEWS1]

It looks like free agent Choo Shin-soo soon will have a megadeal worth about $100 million with a big-market Major League Baseball team. Many such deals were reached before MLB’s winter meetings, which were held last week, including the Seattle Mariners’ 10-year, $240 million contract with free agent second baseman Robinson Cano and a seven-year, $153 million deal with free agent center fielder Jacoby Ellsbury.

Analysts said Choo, who along with Cano and Ellsbury is considered one of MLB’s top three free agents, would sign a similar deal during the winter meetings. Many local media outlets reported that Choo is seriously negotiating with several teams, such as the Texas Rangers and Detroit Tigers, but as Choo’s price has skyrocketed thanks to the Cano and Ellsbury deals, potential bidders like the Rangers are possibly considering a second or cheaper option like Nelson Cruz.

The question is whether Choo could be the first $100 million Asian baseball player, like his agent Scott Boras claims, or whether his hot stove season will end like that of Michael Bourn, who got only a four-year, $48 million deal with the Cleveland Indians during the 2013 hot stove season. Bourn was also represented by Boras, who said at the time that Bourn was worth $100 million.

According to sources, Boras wants a seven-year, $140 million deal for Choo. The Dallas Morning News once reported that Choo wants an eight-year deal worth more than $150 million, but the source said on the condition of anonymity that Boras never demanded an eight-year deal from the Rangers. The source said the Rangers have offered a five-year deal worth about $110 million to Choo, who is turning 31 next season.

It is not a surprise that the Rangers are the biggest bidders for Choo. Rangers’ officials were spotted collecting information on Choo in Korea in the past few weeks. One of the officials was Curtis Jung, who was the interpreter for Jerry Royster, who managed the Korea Baseball Organization’s Lotte Giants from 2007 to 2011. Jung works as the Rangers’ scout in Korea. Sources confirmed to the Korea JoongAng Daily that several people, including Jung, had met some of Choo’s former high school team players in Busan and some members of the Korean national baseball team.

“They basically asked everything about Choo,” a teammate who played with Choo on the national team said on the condition of anonymity. “They asked about his personality, how he gets along with his teammates and basically things they were curious about on him. It looks like their interest on him was quite ‘serious.’”

“Prince Fielder’s contract was made on Jan. 25,” analyst Song Jae-woo said. “I can’t find reasons for Choo to make a deal until that late, but there is a possibility that the negotiations might continue until the new year.”

It looks like the Rangers are tussling with Choo through the media. Jon Daniels, general manager of the team, said last week that there will be no more “major moves” in the remaining offseason, though no one trusts that. The Rangers need a corner outfielder who can hit in the leadoff spot, where Choo perfectly fits in.

Another Korean free agent, right-handed pitcher Yoon Suk-min, 27, is expected to find a team within two weeks, according to Boras, who said, “Two to three teams are negotiating with Yoon.”

He said during the winter meetings that those teams making offers to Yoon consider him to be starting pitcher worth a two- to three-year deal.

Sources familiar with the Kia Tigers, Yoon’s former team, said Yoon is on the radar of the Detroit Tigers and Chicago Cubs.

“As most of the so-called A-class players’ deals have been sealed in the past few weeks, players on the next level, like Yoon, will have more serious negotiations in the next few weeks,” said analyst Song.