Many ways to make merry this Christmas

Many ways to make merry this Christmas 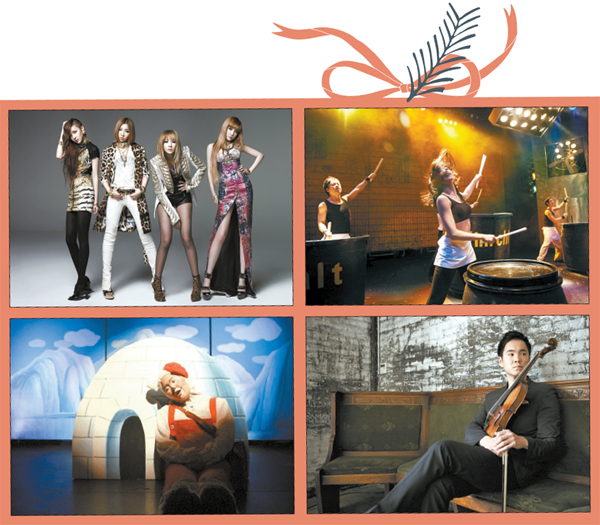 In the past, those who couldn’t plan ahead for what to do during Christmas may have just cuddled up at home, watching a younger Macaulay Culkin contend with two burglars in “Home Alone,” the film series that plays on television almost every Christmas.

But how about planning things a little earlier this year and enjoying a classical concert, a ballet performance, or even an all-night party at a club that invites the hottest artists to play?

The story varies from production to production, but the basic outline is based on E.T.A. Hoffmann’s “The Nutcracker and the Mouse King.” On Christmas Eve, Marie (or Clara, as she is referred to in other versions), receives a wooden nutcracker doll as a Christmas gift. She falls asleep on the eve of Christmas and dreams of saving the Nutcracker, and other dolls that have come to life, from bad mice. When the Mouse King dies, Marie is invited to the beautiful Land of Sweets, and after a fabulous party where the Nutcracker turns into a prince, Marie wakes up.

The Universal Ballet has chosen choreographer Lev Ivanov’s version of the classic ballet, which includes more magical and spectacular scenes that children can really enjoy. The ballet company started its stint a little earlier this year, in November, and has been touring other parts of the country, including Incheon, Busan, Daegu and Gunpo. Starting Friday, the show will be staged at the Universal Arts Center in eastern Seoul until Dec. 31.

At this year’s production, Korean audiences will be able to see three dancers take on leading roles for the first time, including Hong Hyang-gee, 24, who will play Clara. In 2002, Hong played the child character of Clara, while current principal dancer Hwang Hye-min played the leading role.

The principal dancer Hwang Hye-min will also play Clara in some versions of the ballet, and Ohm Jae-yong will play the prince, while in other renditions of the production Kang Mi-sun will take on the part of Clara and Konstantin Novoselev will play the prince. The performance starts from 3:30 p.m and 8 p.m. on weekdays, at 3:30 p.m. and 7:30 p.m. on Saturdays and at 2 and 5:30 p.m. on Sundays and public holidays. Tickets cost from 10,000 won ($9.50) to 100,000 won.

Meanwhile, the Korean National Ballet, which began its repertoire of “The Nutcracker” in 2010, has adopted Russian choreographer Yuri Grigorovich’s version, which emphasizes more of the dancers’ detailed movements and requires them to have advanced techniques.

The major difference between the original version, choreographed by Marius Petipa and Lev Ivanov, and Grigorovich’s is that the Russian choreographer transformed all the mime movements from the original into ballet movements. 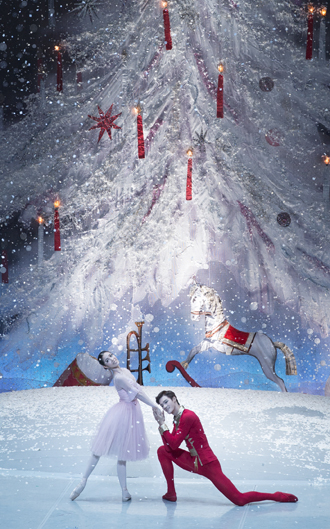 Tchaikovsky’s “The Nutcracker,” presented by the Korea National Ballet this Christmas season, will kick off on Wednesday at Seoul Arts Center. Provided by KNB

Classic music fans can head to violist Richard Yongjae O’Neill and pianist Yuhki Kuramoto’s “Christmas Concert” on Dec. 25. The two musicians will also be joined by the Ditto Orchestra, under the baton of Adriel Kim. The concert starts at 8 p.m. at Seoul Arts Center. Tickets range from 30,000 won to 120,000 won.

Those who would prefer to watch a performance geared toward younger children might want to try “Rudolph’s Christmas Carol,” which is suitable for children older than 1. The story revolves around a girl named Ha-na who writes to Santa Claus, telling him she wants Santa as a Christmas present to prove to her friends that he’s real. Upon receiving Ha-na’s letter, Santa prepares to go meet her, but hurts his back while carrying a heavy bag of presents. After deep consideration, he dresses Rudolph the reindeer as Santa and asks him to meet Ha-na on his behalf.

For music fans, “Christmas Mega Party in Walkerhill,” will amuse audiences with live performances and DJs playing hip music all night long, starting from 9 p.m. on Christmas Eve. Artists including the girl group 2NE1, rapper Beenzino, Dok2, Hi-Lite Records, Monsterz, DJ R2, DJ Soma and “Superstar K4” contestant Zu Kye-bum will be staging endless concerts at Walkerhill Hotel’s Vistahall in eastern Seoul. The party is only for adults, however, and identification will be checked upon entrance. Tickets are 77,000 won.

A nonverbal performance, “Nanta,” also known as “Cookin’ Nanta,” which is an ongoing production, has organized a special event for Christmas. The performance group will hold a late night show on Christmas Eve at 10:30 p.m. at the Myeongdong Nanta Theater and will show its audience a “Jazz Christmas” version of “Nanta.” From 9 p.m., cocktails and fingerfood will be prepared in the lobby of the theater, with jazz music for free before the show. Tickets cost between 28,000 won and 70,000 won.