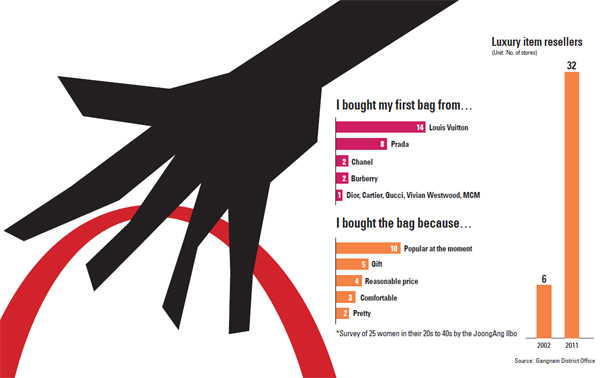 It might not be an exaggeration to say that the generation of the “It” bag has passed.

“It” bag is a term that has been used to describe a particular bag that became popular - and even essential - to own among those keen on fashion.

In the past, as many fashion houses promoted their new bags for each season, many women contemplated whether they should open their wallets to add another trendy bag to their closets.

These “It” bags went by many names, such as the “three-second bag” - because one could easily spot the exact same bag every three seconds when walking on the street - or “Ji-young’s bag,” meaning that the bag is as common as the name (Ji-young is one of the most common names for women in Korea.)

However, without notice, the term suddenly disappeared from commercials and advertisements.

From the late 1990s to the 2000s, Koreans showed their enthusiasm for expensive imported bags with big logos, prints or conspicuous designs, so that anyone could recognize they were carrying a luxury item, even from far away.

“Famous fashion labels started to expand their business into Korea after the mid-1990s, and then [‘It’ bags] started to garner much more attention,” said Yoo Jae-eun, a researcher at Interfashion Planning, a popular trend-research institute. “At that moment, bags with logos or noticeable prints became popular.”

Local consumers first set their sights on a brown and beige monogram bag from Louis Vuitton or a nylon backpack from Prada. They then shifted their attention to products from more diverse luxury fashion houses, from the Balenciaga Motorcycle Bag to the Yves Saint Laurent Muse and, most recently, to the Givenchy Pandora. French label Goyard’s St. Louis bag was also an It bag around 2009, after actress Kim Nam-ju was shown carrying one in the MBC drama “Queen of Housewives.” It was also popular among other celebrities.

Each season, fashion magazines displayed photos of several bags in an attempt to predict which one will be the next It bag.

However, as the demand for It bags skyrocketed, and because many street vendors started making copies of them and selling them for a cheaper price, there became little incentive for people to invest a great sum of their savings on a bag that everyone has - whether it was real or fake.

Kim Jeong-a, 42, said Louis Vuitton’s Speedy bag was the first It bag she bought as she wanted to show the world she was following a fashion trend. Then she moved on to Balenciaga’s Motorcycle bag to make herself stand out from the crowd.

“I wanted to make myself look more out there,” she said. “However, one day I looked around the street, and everyone was carrying it in different colors and I felt like I was carrying a fabricated one, although mine was legit.”

Other shoppers have also lost interest in buying a popular bag.

“Bags with big logos felt hot at the time when I purchased mine and, of course, it was popular then,” recalled a 35-year-old homemaker surnamed Jeong from Apgujeong-dong, Gangnam. She used to shop for widely-talked-about bags such as the limited-edition Louis Vuitton tote made in collaboration with Japanese contemporary artist Takashi Murakami.

“But now I don’t carry it around as it looks so out of style. I was once very proud of having this, but the idea of carrying it now makes me feel embarrassed.”

Jeong still shops for luxury bags once or twice every year, but the items she buys have changed over the last decade. She now shops for more mundane and simple bags, so she feels like she’s getting her money’s worth.

One of the reasons shoppers bought such bags was to become part of the fancy group of people who keep up with trends. However, the purchase of an It bag doesn’t seem to have satisfied their desire.

“I don’t want to carry a bag that is so noticeable that anyone can guess where it is from,” said a 39-year-old woman surnamed Seol from Bangbae-dong, southern Seoul.

One local fashion expert said the fast-changing fashion scene has changed the taste of consumers. Ham Seung-a, owner of a fashion store named Shopaholic, said people have lost trust that buying a seasonal bag will bring the grandiose title of being a fashion icon among their friends.

“They bought a so-called It bag as the fashion label promoted it so much, but as the trend changes so fast, they feel like they have been cajoled into buying that product.”

As a result, more of these bags are also left unused in the closet or are given to local second-hand shops that buy and resell luxury goods.

Accordingly, there has been an increase in the number of shops selling used It bags from the previous season.

In 2002, when the demand for It bags was at its peak, there were only six luxury bag resellers in Gangnam District, which is known for having many affluent residents. That number jumped to 32 in 2011 after people started to lose interest in buying these items, according to Gangnam District Office.

Yet women have not thrown away their interest in buying luxury bags altogether.

“Buying bags will bring women some sense of achievement, as it has become one of the essential goals to have in a woman’s life,” said Kwak Geum-ju, a psychology professor at Seoul National University.

“But, on the other hand, carrying a bag that is out of style will only make themselves look bad, which is the complete opposite of the reason they bought the bags.”

These days, more customers are considering buying classic or simply designed bags so that they can wear them without worrying about going out of style, because they can’t afford to buy a new, hot item every season of every year.

Choi Hyun-ju, 36, from Oksu-dong, central Seoul, said that she now shops for bags that do not have any conspicuous logos, such as classic lines from Chanel or Hermes.

Another expert pointed out that the disappearance of It bags is simply a signal of a new trend, a love for the classics.

“As there are too many fake products out there, people tend to look for more originality, and that phenomenon highlights classic design.”

Other fashion stylists agree with the idea that people have been looking for something simple.

“Not just bags, but fashion itself is heading more toward the classics,” said fashion stylist Han Hye-yeon.

“As people think they will look more hip wearing something classic, they go for a more classic bag to match their fashion.”

Following the trend, many luxury fashion houses have changed their marketing strategies to focus more on bags that have been in their product lines for a longer time than the limited editions made through collaborations with other designers or artists.

“Since last year, we have used more classic bags of ours as the trend is coming back,” said Kim Ji-hyun, an assistant director of Louis Vuitton’s public relations team. “The situation has been similar at other labels as well.”

Another reason that put an end to the widespread term of the It bag is that people nowadays are exposed to so many different styles that they can just choose to wear something that represents them well.

Instead of being wishy-washy about whether to follow what others do, people now tend to show their inner character more through the items they wear and carry.

“Popularity of the bags made by luxury labels from overseas that come with a 2 million won to 3 million won price tag hit a pinnacle three years ago,” said Lee Seon-ju, a senior merchandising planner at Lotte Department Store.

“People who show particular interest in bags now have five or six of those, and this means that people who buy such items already have what they need.”

People looking to show their taste in bags pay more frequent visits to stores where they can see multiple items from many different fashion designers, rather than going to a store run by one fashion label.

“As the fashion trend matures, people look for brands that the mass public has not yet been exposed to,” Lee said. “And Korea looks set to enter that phase.”

In their search for imported luxury bags, many shoppers are looking for items made by rising designers and rare items that only they can have.

And products from Phillip Lim, Alexander Wang, or Proenza Schouler have been popular among local stores, showing that the trend is definitely changing.

“As the trend changes fast, it is hard for individuals to follow that flow,” said Seol Su-young, a consultant at a public relations agency for fashion houses.

“Many women in their 30s and 40s have already experienced what it is like to carry around luxury bags, so they are looking for something that they can have for a long time.”

The new trend applies to other fashion items, including winter jackets.

Since Italian down jacket-maker Moncler garnered much recognition in Korea after one of former President Lee Myung-bak’s granddaughters was photographed wearing one during early winter 2012, people started to think that luxury winter jackets were worth buying.

After local retailers learned that there are potential buyers of high-priced jackets that cost over 1 million won, they opened a storefront for luxury down jackets, aimed at anyone looking for rare versions of these items but from lesser-known brands among Koreans.

Products from another Italian fashion brand, Herno, and Canadian maker Nobis and Moose Knuckles are quickly becoming popular, after expensive jackets from Canada Goose, along with Moncler, have been released both through department stores and online retailers, with discounted prices to attract more buyers.

“We have stocked more diverse down jackets this year compared to last year, so that customers have more options to choose from based on their tastes,” said Han Su-youn, a manager on the public relations team at Galleria Department Store. “Before, people set their minds on buying what was already popular, but their tastes have become more eclectic this year.”