Hard times for banks and employees

Hard times for banks and employees 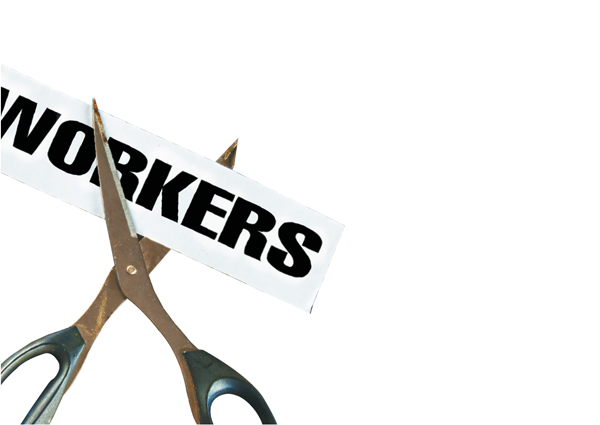 A manager nicknamed Mr. A, who is an employee at Shinhan Bank with 20 years of experience, feels anxious these days. Thinking he has built a good career by working at different branches and headquarters, Mr. A was hoping he would get a promotion next year to become a branch head. However, the bank decided to close 50 underperforming branches early next year and open only five to 10 new ones.

Bank employees like Mr. A have become uneasy lately as companies they work for roll up their sleeves and restructure branches against the backdrop of deteriorating earnings.

Next year, for example, the number of branches operated by Shinhan Bank is expected to be reduced by 45 from the current 941 branches. 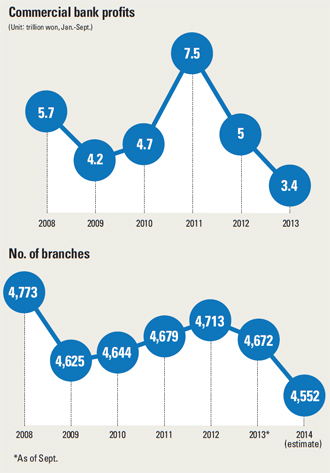 “The number of branch head seats will drop next year amid restructuring pressure,” Mr. A said. “It makes me think now that it would be well just for me to maintain my post rather than hoping for a promotion.”

Mr. A said colleagues yet to receive year-end bonuses have become depressed.

According to the financial industry on Wednesday, seven commercial banks - KB Kookmin, Woori, Shinhan, Hana, Korea Exchange, Standard Chartered and Citi - have decided to close 120 branches altogether, or 10 percent of the 4,673 branches currently being operated.

KB Kookmin Bank, for example, which operates 1,202 branches, decided to merge 55 branches that do not make enough profit early next year. Woori Bank decided to close five of its branches, while Hana will shutter 10 and Citi five. Standard Chartered has mid- and long-term plans to close 100, or 25 percent, of the total number of branches it runs.

The employees from closed branches are expected to be relocated to other departments and given other duties, such as online marketing.

Woori Bank, for example, plans to have 1,000 manager-level employees work outside the office and sell financial products. It aims to reduce at least one employee from each of its 993 branches.

“Head-level employees at branches hardly deal with customers directly in front of counters, so we judged that it would be more efficient for them to go out and attract potential customers instead,” said a Woori Bank official.

With changes coming next year, employees, mainly at the branch-head level, are stressed out.

“What the management told us was that there will be no layoffs, but to us it seems that they are trying to relocate employees to vague positions, to induce them to retire voluntarily,” said an employee at a commercial bank. 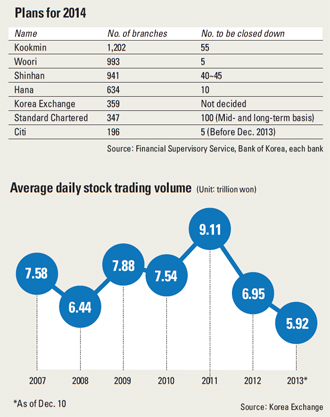 Another banker said, “If the number of branch heads is reduced, then manager-level employees waiting to get a promotion would no longer feel the need to work their best.”

Despite such concerns, it is an obvious choice for banks to reduce the number of branches to cut costs.

Net profit of seven commercial banks from January to September was 3.4 trillion won ($3.2 billion), down 32 percent or 1.6 trillion won from the previous year. Banks’ earnings dropped because low interest rates have slashed their loan-deposit margins, which account for 90 percent of local banks’ profits.

According to the Bank of Korea, as of October, the loan-deposit margin of local banks was 2.54 percent, down 0.08 percentage point from 2.61 percent at the end of last year.

Bank earnings also were affected by companies that have turned insolvent such as STX and Tongyang Group, which added to the losses from loans.

According to the Financial Supervisory Service, the amount of distressed debt in the first three quarters of this year was 22.9 trillion won, up 27 percent from last year.

Experts say that both management and labor union groups at banks should brainstorm wage system reforms in order to stabilize employment and enhance productivity. They point out there is a limit to how much can be saved by closing branches.

“Currently, most manager-level employees at banks receive hundreds of millions of won in annual salary,” said an analyst at a securities firm.

The Financial Supervisory Service is also aware of the growing concerns.

“We will monitor banks and see how well and efficient they are using their workforce,” said an official from the regulator.

The situation is even worse in the brokerage industry. The daily average number of stock transactions has sunk 31 percent compared to a year ago. The net profit of 62 brokerage firms in the county during the April to September period plunged 62.6 percent year-on-year. As retail investors have refrained from jumping into the stock market, local brokerages that rely on commission suffered from heavy losses.

According to Korea Exchange, the daily stock transactions amounted to 7.4 trillion, valued at 5.9 trillion won. Transactions were the lowest in eight years, while traded value was the smallest in seven years. Commission from brokering stocks in most cases account for 30 percent to 40 percent of revenue.

The Kospi has been moving back and forth around the 2,000 mark in the past two years. And this has dampened investors’ attraction to the market.

The nation’s sole securities exchange operator said the number of people investing in the stock market last week retreated 5 percent from a year ago to 5 million people, the biggest drop in seven years. Furthermore the average age of investors has moved up from 42 in 2000 to 48 this year as society ages. Older investors tend to be more conservative than their younger counterparts.

While the lagging market may have been one reason for investors to turn their back on stocks, some blamed irresponsible sales by brokerages.

“As investors shunned U.S. firms as a result of reckless and irresponsible sales of mortgage backed securities that led to the 2008 crisis, Korean investors mistrust of brokerage firms has also deepened due to such incidents such as the Tongyang crisis.”

Troubled Tongyang Securities decided to slash half of its 40 top officials, while Eugene Investment and Securities is laying off 40 to 50 employees out of a total 800.

Despite the efforts, many in the market believe this is just the beginning.