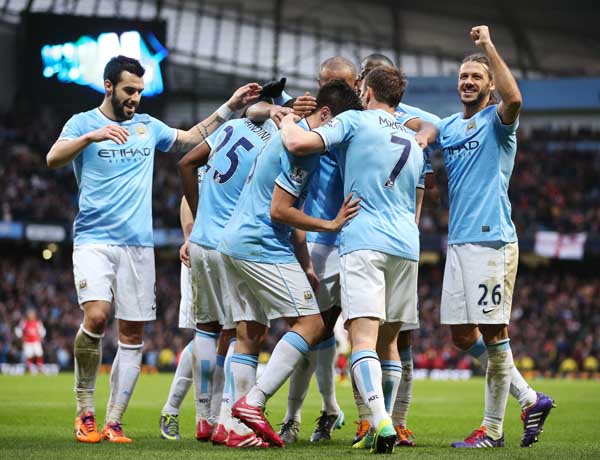 The City’s stylish showmen sealed their eighth consecutive home league success in an exhilarating match by outgunning Arsenal, whose advantage at the top was cut to two points after Chelsea sneaked a 2-1 win at home to Crystal Palace.

Everton’s 4-1 win over visiting Fulham moved them into the Champions League spots as they jumped to fourth, while at the other end of the table West Ham United played out a 0-0 draw with bottom side Sunderland that was little use to either team.

It was the third time this season that City had scored six goals or more, after they dished out similarly crushing blows to Tottenham Hotspur and Norwich City, and the win moved them up to third place, within three points of the top spot.

The victory also put down a light blue marker in a now-congested title race that could have turned decisively in Arsenal’s favor had the visitors managed to conjure a win.

“At times the tempo was frightening,” Vincent Kompany, City’s captain, said. “We looked to be in control of the game for most of it. There were no standout individual performances but collectively we’ve done incredibly well. It is a real fortress here.”

City, whose early opener from Sergio Aguero was cancelled out by Theo Walcott, opened up a two-goal lead with Alvaro Negredo and Fernandinho’s efforts on either side of halftime.

Arsenal rallied with a superb second by Walcott, who curled the ball into the top corner, but David Silva restored City’s two-goal advantage from close range and Fernandinho poked home his second as City kept up their 100 percent home league record.

Even defender Per Mertesacker’s late consolation goal for Arsenal was trumped by City as Yaya Toure stroked in a stoppage time penalty. The final whistle prompted a scuffle between Mertesacker and Mesut Ozil, with the center back seemingly angered by his German teammate’s reluctance to applaud the visiting fans.

Arsenal’s failure to pull clear at the top was a boost for Chelsea but struggling Crystal Palace proved trickier opponents than expected and Manager Jose Mourinho ended the match grateful to Petr Cech for helping them over the finish line.

The Chelsea keeper made a string of fine saves to keep the visitors at bay after midfielder Ramires put the home side back in front with a curler 10 minutes before halftime. Fernando Torres had given Chelsea the lead after 16 minutes with a tap-in, but Palace striker Marouane Chamakh scored for the third consecutive league game with a volley to equalize.

Everton, which won plaudits for its performance in a 1-1 draw at Arsenal last weekend, showed it is a serious contender for a top-four finish with a battling home win over Fulham.