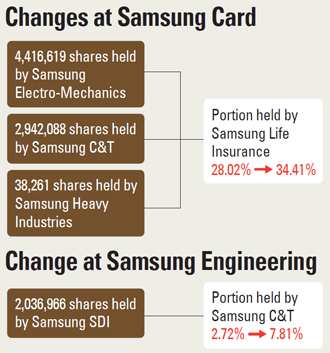 Samsung Life Insurance bought a chunk of Samsung Card from a host of the group’s other finance-related subsidiaries in what analysts see as a signal that Samsung is restructuring itself.

Samsung has yet to adopt a holding company structure, although Samsung Everland, at the top of a complex web of share cross-holdings, is considered the de facto holding company of the country’s top conglomerate.

It is also problematic for Samsung as the current Fair Trade Act bans a nonfinancial holding company from owning a financial affiliate. Samsung Everland holds 19.34 percent of the shares of Samsung Life Insurance, which holds 7.21 percent of Samsung Electronics.

Samsung stirred speculation about a governance structure change earlier this year with two deals among its four affiliates: the handover of a fashion business from Cheil Industries to Samsung Everland and a merger between Samsung SDS and Samsung SNS.