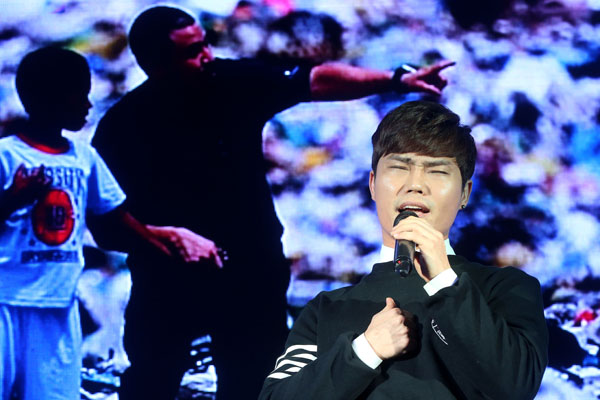 Singer Kim Bum-soo sings “Flying Kite,” from Compassion Band’s second album, “Endless Fruits,” which was released on Thursday, during its showcase at the Blue Square in Hannam-dong, central Seoul.[NEWSIS]

JeA, of the girl group Brown Eyed Girls, began singing “Mama Song” on the Blue Square stage Thursday, but not long after the first three bars she burst into tears, unable to continue. JeA barely managed to finish the song in the end, but her tearful performance was more than understandable to the audience members as the song was dedicated to children in underdeveloped countries who are suffering from poverty.

JeA is one of the performers who sang during the showcase of Compassion Band’s second album, “Endless Fruits,” which was released on the same day.

The band was formed in 2006 within Compassion Korea, a nongovernmental Christian child-sponsorship organization that focuses on the development of children living in poverty.

Korean children who were living in the war-torn country during the early 1950s received support from Compassion International from 1952-93, when Korea was removed from the list of countries that needed foreign aid. During those 41 years, about 100,000 Korean children had been sponsored by donors from around the world. A decade later, in 2003, Compassion Korea was established and Korea, which used to be a receiver of foreign aid, became a provider.

This year, marking the 10th anniversary of the founding of the organization, the band released its second album, which comes four years after its first.

“This album is really special because it all started when we met a boy named Aljo in Cebu, the Philippines, who was living in a trash city,” said actor Cha In-pyo, who is a goodwill ambassador for Compassion Korea as well as a member of Compassion Band. “This 11-year-old boy’s day started by scavenging through a garbage mountain to help his mother earn a living.

The story of Aljo was turned into the song “Flying Kite,” which singer Shim Tae-yoon wrote. Shim, who is the current leader of the band, asked singer Kim Bum-soo to sing the song and Kim “more than willingly” accepted the offer.

“When I heard about Aljo, I really wanted to use my talent for a good cause,” said Kim.

It was Cha who took the lead in forming the band by gathering six more employees at the organization. Its size grew over the years, and Compassion Band currently consists of 80 members, including Korean celebrities like Hwangbo, Shim Tae-yoon, Park Si-eun, Uhm Ji-won, Ricky Kim and many more.

The band members are all volunteers and have been holding more than 360 concerts across the country. Any profit made by selling albums is also donated to the organization.