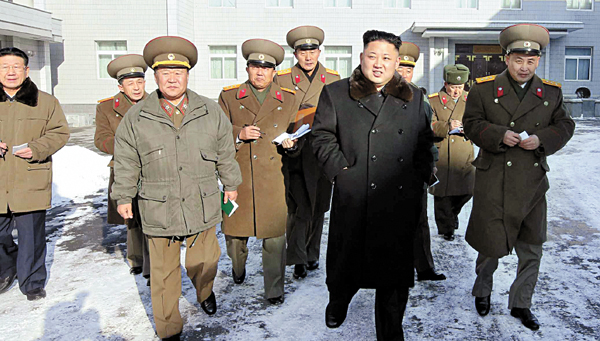 North Korean leader Kim Jong-un inspects the military’s Designing Institute in his first public appearance following the execution on Thursday of his uncle Jang Song-thaek. In this photo published Saturday, Kim, center, is accompanied by Hwang Pyong-so, vice department director of the Central Committee, on the far left, and Vice-Marshal Choe Ryong-hae, the director of the Korean People’s Army Politburo, directly to Kim’s right, and other military officials. Provided by Rodong Sinmun

Kim Kyong-hui, the influential 67-year-old younger sister of the late leader Kim Jong-il and the paternal aunt of Kim Jong-un, was listed sixth in a recent political party list, indicating she continues to remain in her nephew’s inner circle.

The North’s Korean Central News Agency (KCNA) late Saturday announced the death of Central Inspection Committee Chairman Kim Kuk-tae, and Kim Kyong-hui was listed sixth in a funeral committee list alongside other power-wielders in the party and military. She appears to have retained her position as a Workers’ Party Central Committee secretary.

The names before her were, in descending order: Kim Yong-nam, chairman of the Presidium of the Supreme People’s Assembly; military chief Gen. Ri Yong-gil; Defense Minister Gen. Jang Jong-nam; Premier Pak Pong-ju; and Vice Marshal Choe Ryong-hae, director of the Korean People’s Army Politburo, considered a guardian of Kim Jong-un as Jang Song-thaek was also for the past two years.

Her mention on an official list, especially for a prestigious function like the funeral of inspection committee Chairman Kim, who died on Friday at the age of 89, is an indicator that she still holds the favor of her nephew and will likely continue her role as a guardian to the young strongman.

The funeral committee list further indicates who will constitute the new elite leadership in the Kim Jong-un regime.

Jang, once regarded as the second-most powerful figure in the country, was executed last Thursday after he was convicted of treason in a special military tribunal held by the regime’s Ministry of State Security.

A seven-page report released by the KCNA detailed the many alleged crimes of Jang, a vice chairman of the powerful National Defense Commission and the director of the ruling Workers’ Party’s Administrative Department. He was charged with “anti-party, anti-revolutionary factional activities,” plotting to overthrow the government and knock his nephew from power in order to become the new leader of the country.

Much attention was paid to whether Kim Kyong-hui’s position was safe following the downfall of her husband as she disappeared from public radar recently.

A South Korean government source said, “If Kim Kyong-hui lost her power or her health was worsening, it would have been difficult for her to be included in the funeral committee.”

The Asahi Shimbun reported on Dec. 14 that Kim had divorced Jang immediately before his execution, citing a high-ranking North Korea source.

The source said that the divorce happened on Dec. 11 upon the instruction of Kim Jong-un and could be construed as a distancing of aunt Kim and her husband to prevent tainting the Kim family image.

Kim reportedly did not object to a divorce, said the Asahi.

Yoon Sang-hyun, the Saenuri Party deputy floor leader, said yesterday that the report on the divorce has not been confirmed. He had previously said the two were “separated.”

In 1972, Kim Kyong-hui, despite initial objections from her father Kim Il Sung, married Jang, an ordinary student from Kim Il Sung University, where the two met. She has also studied at the Moscow State University and began a political career in 1971, holding various positions such as director of the party’s Light Industry Department.

She became an obscure figure following the death of her father, North Korean founder Kim Il Sung, in 1994, but her political career was boosted after former leader Kim Jong-il suffered a stroke in 2008.

After the death of her brother on Dec. 17, 2011, she and Jang surfaced as the political protectors of the untested leader Kim Jong-un, serving as behind-the-scenes power brokers.

Tomorrow marks the second anniversary of the death of Kim Jong-il, and it is to be seen if Kyong-hui makes a public appearance in the official commemorative activities.

The powerful aunt has been reportedly suffering from illness for a while now.

“In the short-term, there may be a systematic reinforcement of a reign of terror as Jang Song-thaek’s faction is purged, but in the long run, that will lead to insecurity in the system,” the Saenuri Party’s Yoon said earlier.

Despite the ruthless purging of his uncle and his aides, Kim Jong-un was pictured in the North’s official media visiting the luxurious Mount Masik ski resort near the eastern city of Wonsan, smiling broadly.

The KNCA reported that Kim praised the soldiers and construction workers for their efforts to speed up construction in the cold December weather, adding that the project was “near completion.”

This was the second day of public appearances following a visit a day earlier to the Designing Institute of the Korean People’s Army.

Kim’s public appearances indicate that despite the purge of Jang and his followers, he is confident enough to leave the capital of Pyongyang.

The Blue House said yesterday that President Park Geun-hye will hold a foreign affairs and security ministerial-level meeting today to discuss the situation in North Korea following the execution of Jang. Kim Jang-soo, the national security chief, Kim Ki-choon, the chief of staff, as well as officials from the Foreign Affairs and Unification ministries are expected to attend the meeting, the third of its kind to discuss North Korea or the Kaesong Industrial Complex issues this year.

There is division among North Korea experts on the reasons behind the purge and the implications it holds for the future of the regime.

Chang Yong-suk, a researcher at the Institute for Peace and Unification Studies at Seoul National University, told the JoongAng Ilbo, “There is a group that moves behind Kim Jong-un. They led the purging of Jang and coach what Kim Jong-un hears, sees and says.”

Others speculate Kim was behind the purge and it was a show of who really was in charge.

But the brutality of the purge seems to only further isolate the North from its neighbors, say analysts.

The online mouthpiece for the regime, Uriminzokkiri, said that South Korean criticism and “slander” of the decisions and actions of the North Korean leader is a “large-scale political provocation that cannot be allowed.”