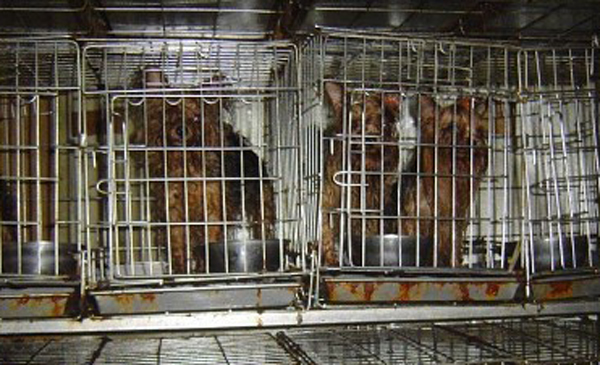 Dogs at an unregistered dog breeding site in Incheon. Confined in a case stacked next to each other in a building with no ventilation, dogs breed two to three times a year and mostly die of severe bedsores and intestinal dysfunctions. Nationwide, there are an estimated 1,000 such unregulated breeding sites. Provided by the Korean Society for Animal Freedom

More than a hundred cages filled the room, a stifling odor permeating the entire site. Inside their enclosures, the dogs barked and howled.

Piles of excrement covered the floor. And in clear violation of animal protection laws, the building had no ventilation system.

This place, in a mountainous area in Pocheon, Gyeonggi, is just one of the hundreds of unregistered dog breeding centers nationwide. In here, government regulations don’t apply. With no official record of its existence, it is essentially unknown to local authorities.

The breeds housed in this building, which the JoongAng Ilbo visited earlier this month, are smaller varieties, Yorkshire terriers and Malteses. These kinds of dogs are considered to be lovable house pets; they are not considered appropriate to eat - a custom still prevalent in Korea.

Animal-rights activists condemn unregistered centers like this one; it is here, away from the watchful eyes of the law, that heartbreaking abuses take place.

The pups born on site are distributed to pet shops to be sold to potential owners. To help the animals withstand the filthy environment, breeders often inject them with antibiotics, said Lee Ki-soon, policy manager at the Korean Society for Animal Freedom, an animal-rights group.

“Dogs at the breeding site are kept in tiny cages all year,” he added. “They are just living to reproduce, and most of them die of severe bedsores or intestinal dysfunctions.”

There are about a thousand such dog-breeding centers across the country, and only 49 sites are currently registered with the government, according to the Ministry of Agriculture, Food and Rural Affairs.

Chae Hee-kyung, director of the Korean Society for Animal Freedom, confirmed that more than 95 percent of dog breeding sites are left unsupervised because they are not documented. “A majority of them are running their businesses in blatant violation of animal-rights laws,” he said.

When asked about these centers, an official at the Pocheon City office admitted that conducting an inspection into these centers was “virtually impossible” as they “don’t have the authority to require the operators to register with local authorities.”

The animal-rights group claims that there is a correlation between the number of stray dogs abandoned by their owners and the abundance of unregistered breeding centers.

“The government should carry out more inspections on these unregistered place,” said Jeon Kyung-ok, head of the animal-rights group Action for Animals, “as well as raise the degree of punishment for violators.”