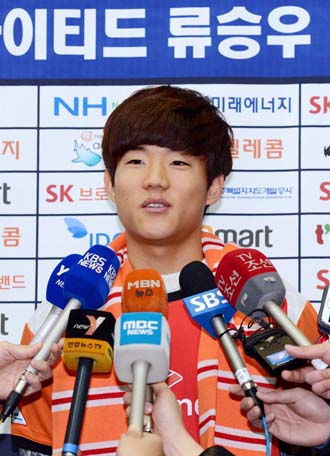 Ryu Seung-woo speaks to reporters yesterday before he left to take a medical test in Germany. [NEWSIS]

Football prospect Ryu Seung-woo, 19, has become a teammate of “sonsation” Son Heung-min, of the Bundesliga’s Leverkusen, via a surprise loan transfer.

Ryu joined Jeju United of the K-League Classic on Dec. 10 as a free agent, but only three days later the club announced that Ryu was loaned to Leverkusen for one year.

Ryu spoke to Korean media outlets yesterday at Incheon International Airport regarding his surprise move before he left for Germany to take a medical test.

When he arrived at the airport around 9 a.m., he was surrounded by about 100 reporters and photographers wanting to hear about the move.

“I will try to learn as much as I can,” Ryu said when asked about his feelings about becoming Son’s teammate. “I can say that I’m half-filled with fear and half-filled with excitement [of making a new challenge on a bigger stage]. I really want to thank my club [Jeju United] for giving me such a great opportunity.”

Jeju United said last week that it agreed to loan their rookie sensation to Leverkusen, which is in second place in the league, to give him a chance to improve himself in a better league.

This isn’t actually his first time receiving an offer from a European league team. Before he joined Jeju United, Bundesliga’s Borussia Dortmund also offered him a contract but Ryu rejected it. At the time, he said he wasn’t ready to play in Europe.

Ryu drew attention from scouts of European league teams after scoring two goals in FIFA’s U-20 World Cup in July. Spain’s Real Madrid also made an offer to Ryu at the time.

“The reason I decided to play with Leverkusen was because it was a one-year loan offer,” Ryu said. “It gives less pressure to a player my age. What I’m trying to do in the next year is to learn Leverkusen’s football to develop myself as a better football player. I think I got a great chance for it.”

Some people speculated that Ryu’s move to Leverkusen is an attempt to avoid the K-League’s so-called “five-year rule,” which states, “If a player who hasn’t submitted an application of his or her intention to play on a K-League team joins a team outside the country, the player can’t be registered to the K-League for the next five years.” They said Ryu used Jeju United as a safety in case he fails to adapt to Leverkusen.

After the one-year loan, Ryu could transfer to Leverkusen if he, Leverkusen and Jeju United agree.

“I haven’t thought about such things,” Ryu said. “I practically agreed to join United in November, but Leverkusen never gave up on me. Me and Leverkusen were negotiating about the loan when I was about to join the United. United eventually allowed the one-year loan after I joined the team. Without the team’s agreement, this move was impossible.”

Regarding the future, when the one-year loan expires, he said: “I’m not thinking about it [completely transferring to Leverkusen]. Because there are still many things to learn as a football player, I will concentrate on advanced football in Germany. That is all I care about. I haven’t developed any further plans because it is meaningless.”

“We don’t have any official stance about the five-year regulation thing,” a Jeju United spokesman said at the airport. “There was no problem on this loan. Ryu showed his strong desire to play in a European league and we decided to give him a chance, not only for him, but also for the club’s future.”

About becoming a teammate of Son, who is leading the team’s offense with seven goals this season, he said, “It is great to have a teammate like Son, especially in a foreign country, but I will not just rely on him to adapt to the team faster. Coach Park Kyung-hoon [of Jeju United] told me to feel small in front of the European players and try to play my football just like I used to do. I will keep that advice in my mind.”