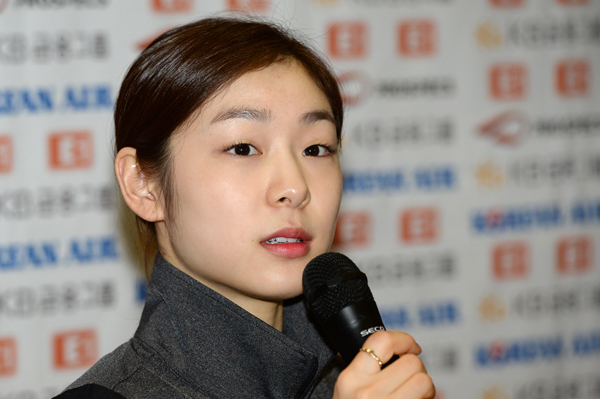 Kim Yu-na talks about her plans for the 2014 Winter Olympics. [NEWS1]

Figure skating queen Kim Yu-na will have a final rehearsal to prepare for the 2014 Sochi Winter Olympics at a local event.

According to the Korea Skating Union, Kim yesterday submitted an application to participate in the 68th All-Round Championship that will be held in Goyang, northern Gyeonggi, from Jan. 3 to Jan. 6. It will be Kim’s final competition before the Sochi Olympics, which begin in February in Russia.

After finishing the “Golden Spin of Zagreb,” an event held in Croatia earlier this month, she said she was considering participating in a local event. “I think it is necessary to participate in a championship event because I haven’t had many such experiences this year,” Kim told Korean media outlets after the Croatia event. “Because the local event gives me a few more weeks to prepare for the Olympics, it could be a good rehearsal for me.”

Participating in this local event wasn’t initially in her plans, but she had to make many adjustments due to a foot injury she sustained during training in September.

Kim was meant to participate in the International Skating Union Grand Prix event in Canada (in October) and France (in November), but she had to withdraw due to her injury.

She then chose the Croatia event as her comeback stage and the place to unveil her new program that will be performed in Sochi. In the event, Kim earned 204.49 points - 131.12 points in the free skate and 73.37 points in the short-program - winning the event by a huge margin.

There were worries that Kim might struggle because the event was staged only weeks after she had recovered, but she showed her class through her free program, which was accompanied by the high-tempo tango music “Adios Nonino.” Kim said the program is the hardest she has worked on in her career.

This is the second time Kim has used the all-around event to prepare for an international event. After participating in the NRW Trophy event in Germany in December 2012, she skated in the All-Round Championship in January and earned a total score of 210.77 points. About two months later, she won the ISU World Championship in Canada with a total score of 218.31 points, the second-highest score in the history of women’s singles figure skating.

“I feel like I need to work on more details in the last two months I have left,” Kim said. “I remember that I earned more confidence after successfully finishing the local event last year before the Canada event. As I said before, I need to improve many things, including stamina, in order to have a good outcome next year.”