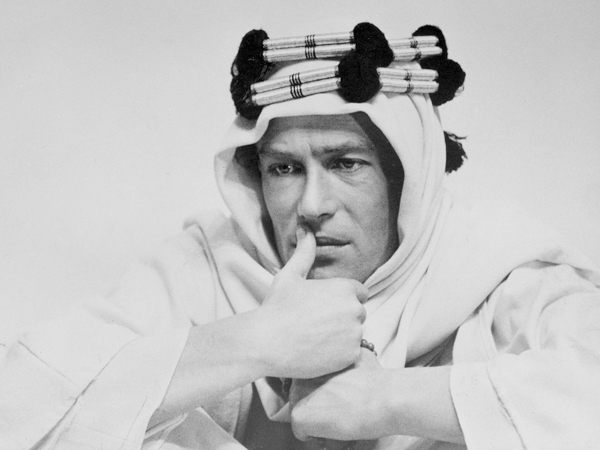 Actor Peter O’Toole plays Lawrence in the movie “Lawrence of Arabia.” He died at 81 on Saturday. [AP/NEWSIS]

Stage and screen star Peter O’Toole, the lanky actor of regal bearing and piercing blue eyes who shot to fame in the title role of the epic film “Lawrence of Arabia,” has died at age 81 after a long illness, his agent said on Sunday.

The eight-time Oscar nominee, who survived a bout with stomach cancer in the 1970s but whose health had been damaged by years of heavy drinking and chain-smoking, died in a London hospital on Saturday, his agent Steve Kenis told Reuters.

“Peter O’Toole’s family announced today that very sadly Peter died yesterday, peacefully in hospital. He had been ill for some time,” Kenis said in a statement.

Appearing in dozens of films during a career spanning six decades, O’Toole is best remembered for his breakout role in David Lean’s 1962 blockbuster “Lawrence of Arabia” starring as T.E. Lawrence, the eccentric British army officer who fought with Arab irregular troops against Ottoman Turkish rule in World War I.

The film earned O’Toole the first of eight Academy Award nominations as best actor in a leading role.

Nearly a half-century later, O’Toole gained a new following among cable television viewers for his portrait of Pope Paul III, the Roman Catholic pontiff at odds with Britain’s King Henry VIII in the historical drama series “The Tudors.”

In between, O’Toole delivered seven more Oscar-nominated performances, along the way becoming one of just a handful of actors to earn Academy Award bids by playing the same character in two different films - portraying King Henry II in “Becket” (1964), co-starring Richard Burton, and in “The Lion in Winter” (1968), opposite Katharine Hepburn.

Believed to have been born in Ireland, O’Toole grew up in England and trained as an actor at the Royal Academy of Dramatic Art where he was in the same class as Albert Finney.

His striking blue eyes, tousled brown hair and 6-foot-3-inch frame made him an instant hit with women when he began his stage career in 1954.

He initially made waves on stage in several key Shakespearean roles, including an acclaimed turn as “Hamlet,” and launched his film career in 1960 with small parts in a handful of pictures, including “Kidnapped” and “The Day They Robbed the Bank of England.”