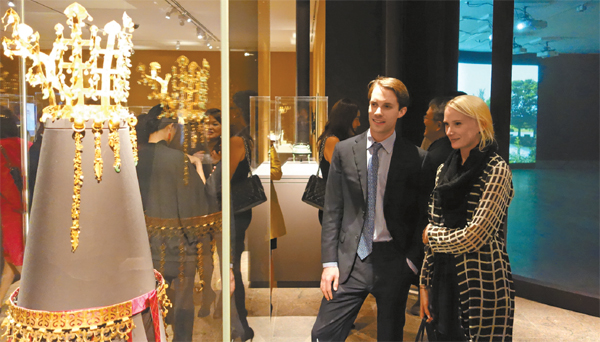 Viewers enjoy the opening of “Silla: Korea’s Golden Kingdom” at the Metropolitan Museum of Art in New York. Provided by the National Museum of Korea. By Lee Jussarang

NEW YORK - The highlight of this holiday season for the Metropolitan Museum of Art is “Silla: Korea’s Golden Kingdom,” one of the first major museum exhibitions in the Western Hemisphere that introduces the culture of the Silla era (57 BC-AD 935).

The Met has been preparing the exhibition for years, and since its Nov. 4 opening, it has attracted about 70,000 visitors. The exhibition runs until Feb. 23.

The exhibition is drawing around 2,000 visitors per day on average, according to Egle Zygas, a spokeswoman for the Met. 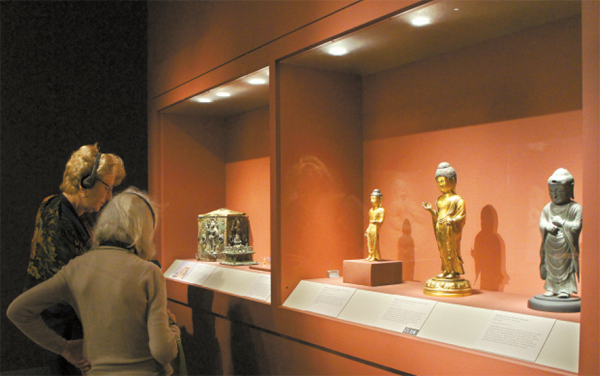 The exhibition brings together 130 pieces of Silla history, covering the years 400 to 800, with a spotlight on Bodhisattva in Pensive Pose, National Treasure No. 83.

In addition, many people have particularly shown interest in the fifth-century gold crown (National Treasure No. 191) and the belt with ornaments (National Treasure No. 192), which are on display together on a cone-shaped pillar. Both were excavated from Hwangnam Daechong, one of the largest tombs in Gyeongju, North Gyeongsang, built for an unknown king and queen.

“This is magnificent,” said Paul Keane, from New York, who had never been to a Korean exhibition before. “I enjoyed the crown and the belt very much, and wonder how they were able to adjust with the weight. People must have been smaller back then, and I find it very surprising that they wore this.”

On one day, a group of 100 people from Connecticut visited the exhibition.

“The history beneath this exhibition is interesting for me,” said Fran Owen, a member of the group. “I’ve been to Korea for business, and my most recent visit was in 1984. I had no time to explore the culture and history of Korea back then, and now that I get to see it, it’s extraordinary.

“It’s different from other tombs, like Egypt perhaps. It’s incredible that the tomb was kept safe until the 1970s, not robbed.”

Another visitor who declined to disclose her name said that Koreans should tell more stories about themselves.

“The Korean community should speak out more,” she said. “This exhibition is a great thing for Korea, considering that the original Korean gallery here in the Met is rather small. I love the gold accessories here, it’s incredibly beautiful.”

The Met houses a few Korean artifacts in a small gallery, located deep in a corner on the museum’s second floor. No wonder that the Silla exhibition, on the first floor near the main entrance, is a symbol of Korea’s growing importance. It also serves as a history classroom for Korean-Americans.

“It was a great chance for the students to actually see how beautiful and powerful Korean art is,” said Hyun Su-jung, a curator, who led students on a tour for the Donghwa Cultural Foundation, based in New Jersey.

Eric Ahn, who came to the United States when he was a middle school student, visited the exhibition recently.

“When I hear the word ‘Silla,’ I remember my younger days back in elementary school, when Gyeongju was the top destination for field trips,” he said. “And you don’t study on field trips when you’re young, you just play.”

Now that Ahn is an adult, he says that it feels like he has been newly introduced to the culture of Silla.

“It is evident that Silla had a rich culture of decorative art, and by the end of the exhibition when I saw that video of Seokguram, I wanted to visit Korea and check it out myself,” he said.

The exhibition welcomes viewers with a wide-screen video of the Hwangnam Daechong. The video depicts the construction of the royal tomb, which has stood since the fifth century.

The first part of the exhibition grabs the viewers’ attention with gold artifacts, on display under low, dim lights. The sophisticated craftsmanship in the pieces is clearly visible, and the crown remains notably intact because of its preservation.

One of the techniques behind these golden artifacts involves a method called granulation, in which grounded golden powders are inflamed with a torch to form tiny golden balls that are then added onto the golden surface of various treasures. This method can be seen clearly on one of the earrings, National Treasure No. 90, and an interactive video re-enacts the process of how the earring was made.

The second part of the exhibit focuses on Silla’s globalization. Alongside with the local artifacts, there is porcelain brought from China, a dagger and sheath from Central Asia, Roman glassware and more, all found in the Silla tomb.

Denise Leidy, the curator of the exhibition, stresses that Silla’s unique tomb-making method from this era contributed to the artifacts’ preservation. Silla tombs consisted of three parts: the wooden panel that holds the dead body and the artifacts, a thick layer of small rocks covering it and the soil covering everything.

“It is interesting to know that something outside of Silla was found in the tomb,” Leidy said, “but to see the way it’s preserved perfectly is astonishing, considering that this much preservation is hard to expect in the original region where the artifacts were made. It shows how well built the Silla tombs are.”

In the beginning of the Silla Dynasty, gold served as the main material for royalty and nobles. However, with the rise of Buddhism in Silla in the sixth century, people started using gold for religious occasions, and this is the focus of the third part of the exhibition.

Bodhisattva in Pensive Pose - made in gilded bronze - shows how the people of Silla invested a large amount of gold in creating images of Buddha. From a 93.5-centimeter (3-foot) figure of the Bodhisattva to others as small as 10 centimeters, they produced a wide array of Buddhist images to portray and promote the new state religion.

For those in New York who are unable to visit Gyeongju, the exhibition also provides a video that shows how the Seokguram Grotto, a famous hermitage, was built.

The artifacts on view are entirely on loan from the National Museum of Korea in Seoul and the Gyeongju National Museum. But the different setting that the Met provides creates a special chance to give people from around the world a special, personal connection with Korean history.